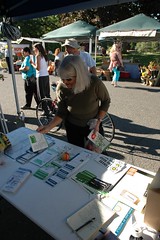 Last week I worked a table at the Interstate Farmers Market. I passed out free bike maps and stickers, talked to folks about bikes, and answered random bike questions.

As an ice-breaker I asked people to try and stump me with a question about bikes in Portland. I got quite a range of responses including; 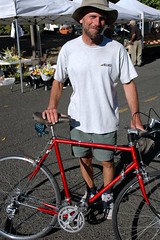 [Frank and his beloved Fuji.]

But besides chatting about bikes, the thing I like most about going to events like this is that I inevitably meet an interesting person.

Take Frank Kunkel for example. The first thing I noticed about him was his smile and his beautiful, red vintage road bike.

He approached my table slowly and when I commented on his bike I could tell I’d struck a nerve. It turns out he has owned this bike since he was 15 years old (he’s now 49) and it’s the only bike he’s ever ridden. Frank moved to North Portland from Michigan in 1999 and has not owned a car since. 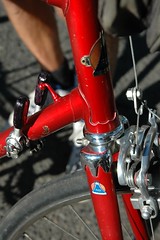 I’ve seen people marry their bikes, but I’ve never sensed the same attachment between man and bike than I did with Frank and his Fuji “Special Road Racer”.

I don’t know, maybe it was the way he spoke about it, or the calm, caring way he held it (I know that sounds weird), or the fact that it was so well cared for. Whatever it was, he and his bike left an indelible impression.

I’ve had some favorite and faithful bikes over the years, but nothing that compares to this.

How about you? Do you like your bike, or do you looove your bike?

I have a 1983 Trek Racing frame that I have ridden since high school. I have spread the rear triangle to accept 9/10 speed hubs. My wife has an aluminum racing Cannondale from 2001, and we are the same size. I ride her bike occasionally, but I love my old steel Trek. There is something about that bike, the geometry, the responsiveness, the short wheelbase, I don’t know, but its perfect. That bike has carried me all across the country, from New York to Florida, to Oregon.

And yes, I love my Bianchi Milano.

My bike is Freedom. A Racer. A Tourer. A Commuter. It’s neither clean nor dirty. It relieves stress to ride it or take care of it or upgrade it.

Ha! I love it. “And now on Bike Talk it’s time for Stump the Chump!”

Which of those questions stumped you?

And what were the answers that you did give?

I love Frank; both he and his bike are BEAUTIFUL.

hey, I couldn’t help but notice that he’s carrying/using a cable lock. My word, that worries me. I would hate to see him separated from his love by a cable cutter.

by the way Cate, I used to live in B-twon and when I did I rode my bike to the Farmer’s market weekly – sometimes on my Schwinn Twinner with my hubbie. So, it’s certainly been done but it’s sad to hear that it’s such a rarity.

Jonathan: for us newbies, how about posting the answers to those stumper questions posed above?

Regarding training for the Oregon Coast trip. I road it the last week of July. It was amazing. An epic ride everyone must do. Getting back to the training question, I just kept doing my 22 mile daily commute from NoPo to B-tron. I was in plenty decent shape for the ride. One adjustment I made a couple weeks before departure was to go over the West Hills (Scholls Ferry-Sylan) instead of around them (B-tron Hillsdale Hwy-Terrwilliger to the south). In truth, I should have done much more of this. The coast ride is much hillier than one might imagine. Plus there is the Coastal range between Portland and the coast. With loaded panniers all those hills add up. So, get as much hill work in as you possibly can. Other than that, don’t sweat the training too much. Just go out and have a great time. It is a wonderful ride that any reasonably fit, daily commuting person can handle.