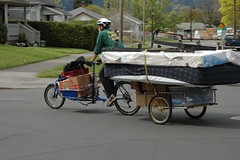 [Another day, another load for Robert.]

It’s been way too long since I joined my cargo-loving compatriots on a bike move but I’m,happy to report that the bike move(ment) is as strong as ever! *Local and international media are taking notice.

Dan Kaufmann of CrankMyChain! caught a recent one on video. You can watch it on his website or download a crispy, Quicktime version. 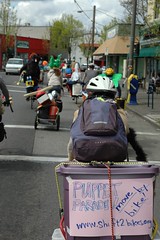 And remember my story about the BBC (yes, the BBC) wanting to come to Portland to film one? Well, they came and produced a big story for their Newsnight program. The story was mostly about our transportation system on the whole, but if you watch the entire video, you’ll catch a bit of a recent bike move and an interview with local cyclist Rachel Freifelder.

Read and watch the story here.

Also check out the post about the show on the BBC Newsnight blog for more global discourse on Portland’s transportation system.

*And our local Portland Tribune filed this story about a bike move on August 6th. Amazingly, the story spurred this anti bike move letter from a reader.

Then there’s the upcoming BTA bike move and some talk on the Shift list about our first-ever bi-state bike move.

Whew! If this sounds like fun (it is!) then stay tuned to the Shift email list and their Move-by-Bike web page for announcements and details on upcoming moves.

[*I added this after the post was first published.]

This was in today’s Tribune:

Letters
Bikers not above the law

The move-by-bike volunteers feel that to do this job, they have to block traffic and cause other people inconvenience (Bike movers find ways to haul it all, Aug. 1). Is that right? What an arrogant attitude. These people need a clue.

i’ve never been on a bike move that involved corking. i don’t get it. what’s the point? Why not just participate in traffic as another road user?

If you don’t cork when a light turns red while your group’s partway through, then you all have to sit there blocking traffic, a parking lot entrance, or a driveway, or the sidewalk, waiting for the people who were left at the light to catch up again. Then you have to start up again with your load, often uphill (this happened during Deepak’s bike move, turning from Broadway onto Williams). This makes you an even slower, ungainlier traffic participant than you otherwise would be.

The front riders in any bike group, though, really ought to stop at red lights. It’s only sporting.

I don’t buy it. Give everyone a map, and it will be OK if the group splits up. Of course, corking is “easier,” but so is using a truck.

Stopping at red lights (and stop signs) is sporting enough, but more important, it’s courteous. It also happens to be legal, but common courtesy is much more important than law.

Anyway, I don’t want to make this an argument. People will do what they want, and I can’t do anything about it. It is a bummer for me, though; I love doing bike moves, but if they just turn into another corking ride, I don’t know what I’ll do. Check beforehand to see if it’s a “corking move” or not? It would be really sad if I had to curtail my participation in collective activities because of this.

It is ALWAYS safer to keep a group ride together in one group. Otherwise you have a bunch of bikes, then an impatient driver in a cra, and then another group of bikes. Maybe in a perfect world where motorists didn’t try to intimidate (i.e. run over) cyclists we wouldn’t have to cork and keep group rides in one group.

How arrogant…trying to preserve your own life and the lives of others. Motorcycle group rides cork too. The arrogant ones are the ones in cars who think they have more of a right to the road than smaller road users.

Really if a bunch of construction equipment was moving slowly down the street and had flaggers blocking intersections (corking) to keep the equipment in one group it would not raise the eyebrows of a single motorist. But because it’s bicycles….

i’m wanting to move in the next few months and i’d rather have it by bike and i’d also rather have everyone ride together. so if that means corking a street so everyone was safe, i’d want that.