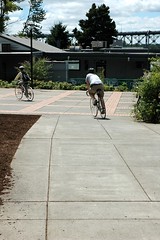 Yesterday was the public hearing on the SK Northwest development case. Unfortunately I wasn’t there but here’s a report from what I’ve heard and read so far.

According to Evan Manvel of the BTA there were about 45 people there which is “significantly more than these hearings usually get.”

The BTA showed up to support the City’s ruling against the development and to, “deflect some arguments put forth by the applicants.” Here’s more from Evan’s post on the BTA Blog:

“The developers argued that the trail wasn’t a transportation facility, because it’s managed by Portland Parks rather than PDOT. They argued that they….weren’t impacting public access to the river and hence should not be required to improve such access. They also argued that bicyclists much prefer bike lanes to off-street paths. 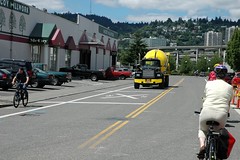 We argued that adding 300-500 car trips across the interim cut-through path (on 4th and Caruthers) clearly impacts public access, that all of our surveys show bicyclists prefer off-street paths to bike lanes (especially those through industrial areas with parallel train tracks, trucks parked in bike lanes, and gravel everywhere), and that if industrial uses aren’t compatible on the property with the bike path due to safety, clearly the industrial-area bike lane on 4th is incompatible with safety and an alternate structure should be built.”

And Mike Houck from the Urban Greenspaces Institute had this to say:

“The appellant attorneys both argued that requiring the trail was contrary to the famous (or infamous) Nolan and Dolan US Supreme Court cases. The owner’s attorney argued that Dolan vs Tigard should overrule Portland’s standing requirement that when new development occurs that there be a direct nexus between the trail exaction and the development and then made the case that Portland only collects park SDCs on residential properties and, therefore, their requirement for a trail exaction on commercial property does not meet the test of nexus or proportionality.”

And a BikePortland.org reader who was in attendance had this to say:

“I haven’t read the decision, but from the presentation it seems the major issues are (1) it’s primarily a commercial (sales, service) enterprise rather than “water-dependent industrial” and (2) that the design for the buildings goes into the greenway even though it shouldn’t, and (3) the pathway from the building to the dock will permanently prevent a direct trail route between the end of Springwater at Ross Island Concrete and the rest of the Eastbank Esplanade.

I think the combination of improper zoning and protrusion into the greeway are both enough to prevent them winning the appeal.”

Also testifying against the development were Gregg Everheart of the Portland Parks Department and Bob Sallinger from the Audubon Society of Portland.

According to Evan, the hearings officer now has 17-24 days to make a final decision. I will try and report back as soon as I hear something. If you were there, please share your thoughts on how it went.

I had really not thought of the issue in terms of a strict transportation angle, which is a darn clever way to frame it. If you accept the proposition that bicycles are a normal part of the transportation system (Portland obviously does), and that developers are regularly required to make adaptations/concessions to improve tranportation infrastructure (usually intersections, roads, traffic lights etc) it then follows that the path is really just a normal requirement, like a sidewalk or curb.

I looked over the decision and here are my impressions. After that is
my summary of the appeal:
* The majority of the uses cited by the applicant are commercial in
nature, rather than industrial as the site is zoned (IH).
* The applicant submitted several different and somewhat conflicting
plans for the site.
* The applicant submitted intentional or unintentional
misrepresentations of the site, including the loction of the greenway
setback.
* The applicant did not respond to a number of requests from the
Bureau with respect to clarifications, leading to several instances
where reasonable assumptions had to be made as to the intended use.
* The applicant did not submit a proposal for a trail across the
parcel in accordance with the Greenway Plan for the area. Part of the
argument against needing this is that the adjacent parcels on either
end do not provide access at the present.
* Violates the intention of the Greenway zone along the river, since a
large dock with boats tied to it would definitely mar the aesthetic
nature of the shoreline.

Summary of the appeal:

* The requirement that they allow/build a trail on the site are an
“unconstitutional exactment”, so they argue that they shouldn’t have
to do it.
* The greenway setback is defined wrong in the decision.
* The biggest thing is the first item, where they state that the
proposed uses have been miscaracterized. However, they don’t offer
any reasoning as to why this is. I think this is the biggest issue,
that they want to put a retail/commercial business in a heavy
industrial zone. IH zones are reserved for “ugly” industrial
businesses, not for places where private individuals are going to be
hauling boats in and out all week.

Overall, I have the feeling they’ve done a terrible job with their
application and appeal. This could be a really great chance to get
part of that area reserved for a trail, get native plantings done in
an area that’s currently dominated by invasive blackberry vines
whilest preserving the existing cottonwood trees, and get a business
there that isn’t actually heavy industrial. After thinking about it
some more, having a place where boats are occasionally moved from
river-to-shore is at least as safe as currently dodging cement and
lumber trucks. This could be a real opportunity to work with SK and
get the area developed properly.

Did anyone at the hearing mention that the owner/developer of the property immediately south of the subject parcel also has a proposal in the works for a storage/industrial/mixed use project and is embracing the greenway bike path concept?

As a planning student, I’ve read and studied the Dolan vs. Tigard case quite extensively. Basically, the comprehensive plan or TSP that calls for a bikeway is worthless unless the City or other public agency intends to compensate the property owner at fair market value for use of private property. However, the City can request and receive a dedication or easement for the trail if, and only if, there is a roughly proportional nexus between the proposed use and the requested dedication. In other words, the City or public needs to prove that the proposed development of the property will directly or indirectly create the need for the bikeway. It does not matter than the bikeway’s been planned for. I repeat: Having the bikeway shown in a plan is meaningless… The only fact I’ve heard mentioned so far that relates to this judicial requirement is that an additional 300-500 daily vehicle trips will added to local streets, which will negatively affect bicycle safety on those streets.

It seems to me that the ultimate decision (this will likely go beyond the City of Portland to the Land Use Board of Appeals or state court system) could go either way. The decision maker/board could simply state that since those streets most impacted by the development’s traffic already provide a safe haven for bicycle traffic through the form of bike lanes, the incremental increase in traffic does not warrant such a dedication. That same decision maker/board could just as easily state that the increased vehicle conflicts warrant the dedication of right-of-way. There’s no science to this.

Since further appeals will be “on the record” (meaning no new information may be presented by the applicant or anyone else), the decision on this case may rest with the adequacy of the arguments made thusfar. Hopefully the applicants’ attorneys were sloppy enough to lose the case on a technicality.

POSSIBILITY FOR A WIN – WIN SALUTION ??

I do not know how wide a path this property owner needs to access the water, or whatever access they need. Question is, could a tunnel or bridge be built, either for the owner to access their needs, or for the cyclists to go under or over the owners access. Is there a way to create a win-win salution ??

They should just reclassify the bike path as an easement. That way the property owner cannot build on it and much provide access to it.