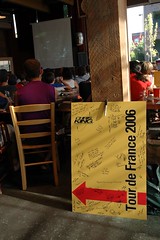 Last night I finally got down to the Lucky Lab to join the Chris King Tour de France viewing party. Chris King Components is based just a few miles from the Lab and they started the Tour party tradition last year when their headsets were ridden by Lance Armstrong to his 7th straight Tour victory.

Last night’s crowd was solid and the Lab was hot as Floyd Landis put in an epic effort to get back to the front of the race. King marketing guy Chris Distefano (seen here at the Bike Show) said it was a good crowd, but Tuesday’s Alpe d’Huez stage was even bigger,


“You couldn’t even move in here there were so many people. I heard of people finding jobs, making new friends, one guy found a girlfriend. It was crazy. It must have been the cheap beer (it was Tight Wad Tuesdays). It was magical.” 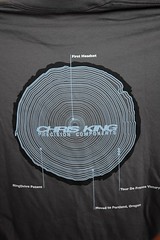 My brain was packed with all the radio show stuff, so I planned to go and just hang out. But of course I end up running into folks and talking bike issues the whole time. Oh well.

Chris Distefano showed me the latest Chris King T-shirt. It’s a great design. Sort of like an x-ray of a tree, with the rings showing important dates in the company’s history. It’ll probably be up on their website soon.

The night ended with a surprising bit of information about Chris King himself. I’ll share that in my next post…

I plan to make it to Lucky Lab for the last stage of Le Tour De France. Should be quite a party.

Now if Chris King would finally produce a FIXED GEAR HUB they would truly be a part of Portland bike CULTure. Where’s the fixed gear hub, Chris King? You could rule Alpenrose and the streets.

Thanks Lucky Lab and Chris King for hosting another year of the Tour. I had a good time in the heat on Thursday with the beer and the crowds.

Jonathan, your photos of the bike parking has spurred me to share the suggestions I have left with the management on their bike parking…

For a business that prides itself on serving the bicycling community…I am continually surprised at the meager and poor bike parking that Luck Lab provides.

The single rack on site at the Hawthorne location is pretty but the parking demand often outstrips the supply…and it is uncovered. It would be nice if the Hawthorne site were to have another 2 racks – take some of that car parking away for a start. And offer at least one covered rack. (Or work out a deal with the Recyclery next door for valet bike parking.)

As for the NW site, it seems Lucky Lab (or its architects) have tried to better the parking situation. There is at least one rack on the inside. This is good. But who installs a wave rack these days?!@!…Portland architects should know better! And most NW cities do not recommend or allow this type of bike rack anymore – does this meet city code?) A series of staple racks would have been better. A two tier Josta.de or Bikeparking.com rack would have been a home run hit – and space efficient too.

And that wooden temporary outside rack was a nice thought from the wood shop, but it was basically a wheel bender rack – another poor design decision. How about adding overflow racks (staple) under the adjoining car parking overhang. And asking PDOT to install racks on the street…there were none to park at when all the other racks were full.

So an open letter (plea) to all bike friendly businesses (and their architects), please think a bit more about rack selection. (The new Vandetta Club on Williams needs some bike parking help too.)

And BANNISH the wave rack!