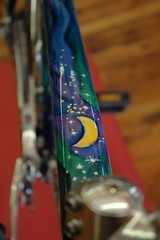 Last night I pedaled out to St. Johns to visit Portland’s oldest bike shop and catch a glimpse of the 2006 ArtBike. I really like this program (organized by Portland Open Studios) because it combines art and bikes while encouraging people to ride.

While at the party I ran into Dean Cannard of Acme Paint. Dean is well-known for his expertise as a bicycle painter. He currently paints for many local builders including Vanilla Bicycles and his work is considered top-notch by many. 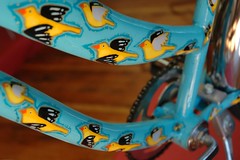 Dean and I talked about how there’s a growing demand nationwide for high-quality painting and that Portland could be better positioned to take advantage of it.

In the basement of Weir’s are the shops of two local bike builders; JoJo Paquini and Ira Ryan. I dropped by to see if anyone was there and ran into JoJo. He told me that he’s hanging up the torch in October to concentrate on work and school and that he won’t be building bikes anymore. We’ll miss his work but fortunately some of us got to meet him and marvel at his beautiful frames at the recent Made in Portland Bike Show at City Hall.

I also got a chance to chat with Steve Weir and congratulate him on his shop’s new location. Steve and his crew (mostly family) worked hard to renovate an old corner building in St. Johns and last night was sort of its big debut (it officially opened in May). 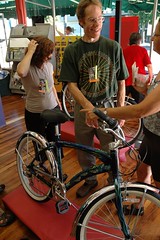 As a gesture of appreciation for their work on this program, Steve and Dean were presented with a painting called “Night Ride” by Virginia Leonnig (artist behind the ’06 ArtBike).

You can have a chance to win next year’s ArtBike by riding to at least five studios when the Go by Bike event happens this October.