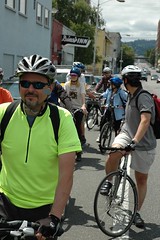 [Too many to count.]

Roger is working on an update to our 10 year-old Bicycle Master Plan and an accurate count of cyclists is an important piece of the puzzle. The number of cyclists using our roadways may be the single most important tool advocates and planners have when it comes to lobbying and fighting off anti-bike rhetoric.

I think this will be neat and I’ve already volunteered. If you’d like join me, you’ll need to attend a training session (with free pizza) on July 25th at 6PM at the Portland Building (1120 SW 5th Ave). RSVP to Crista Gardner at (503) 823-1088 or crista[dot]gardner[at]pdxtrans[dot]org.

In other counting news, don’t be alarmed by the little black counter strip on the ground because I just heard from Roger that the annual bridge counts are coming up.

Last year, we found out that over 10,000 cyclists a day (on average) cross over our four main downtown bridges (Hawthorne, Steel, Broadway, Burnside). I have a hunch we’ll be way over that this year.

The chart below has these numbers from every year since 1992 (click to enlarge).