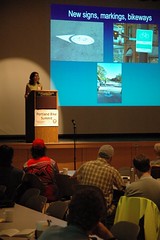 The first ever Portland Bike Summit was an unequivocal success.

At one point, while Congressman Earl Blumenauer addressed the 400 strong crowd, I stood with the mastermind of the day’s event, Linda Ginenthal. She was beaming like a mother watching her child star in the school play and she said, “This is so amazing, I could almost cry.”

It was a indeed a special day whose ideas and energy will impact Portland’s biking landscape for years to come. 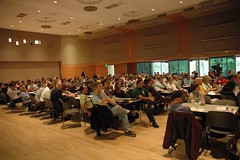 [The place was packed.]

I was most impressed by how the program managed to capture both our legacy and our future.

During his opening speech, Rex Burkholder told us how the BTA started in his kitchen with $300 a month start-up money from Bike Gallery owner Jay Graves. Rex explained that the BTA started partly out of opposition to the first Iraq War and a heightened sense of the vulnerability of our energy supply. Sound familiar? Rex said:

“We’re now in another war over resources, and bikes offer a solution.”

Next to the podium was Mia Birk, former bike program manager at PDOT and now a consultant with Alta Planning. She knows a thing or two about making a city bike-friendly. When she started at PDOT in 1993 there were 65 miles of bikeways. Today we have 267.

Hobbling up to the podium on crutches, U.S. congressman Earl Blumenauer waxed philosophical at times saying that “bicycles have added a dimension to my existence.” He also reminded us how we are a national model and implored us to go beyond bicycles and think about bigger issues like livability. I liked this quote from Earl:

“Portland can be for livability what Silicon Valley was for electronics.” 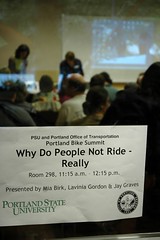 After the opening speeches, the hallways buzzed as everyone made their way into workshops. There were two, one-hour sessions and attendees had to choose from 15 different workshop topics (my head was spinning!). From the ones I peeked into and reports I heard, the workshops were a huge success.

I dropped in the Missing Bikeway Elements in your Neighbhorhood workshop and watched people give feedback on bikeway gaps and dangerous intersections.

Scott Bricker, policy man for the BTA, led a workshop on Lobbying and had a huge turnout (come on, how many cities in the world can fill up a bike law lobbying workshop!). He said,

“Everyone can be a lobbyist. All you have to do is pick up the phone or write an email. That’s all it takes and it has a huge impact.” 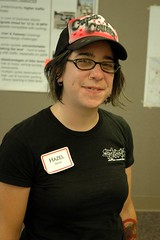 I also had a most surprising encounter with Hazel, a veteran Portland bike messenger. Messengers have been somewhat of an enigma to city bike advocates (myself included). I’ve been wanting to help bring them into the fold and gain a voice in city bike politics, but have been unsuccessful os far. So when I saw Hazel and a few of her cohorts at the Summit I was hopeful.

But after talking with her my hope turned to outright excitement. Turns out the messengers (there are about 60 working in Portland) are finally organizing themselves into an organized group. Hazel told me about how the Portland United Messenger Association (PUMA) – which was only created to put on a big annual messenger race – is close to gaining official not-for-profit status.

They want a seat at the table to advocate for their rights and to promote bike deliveries as a viable alternative to cars. I asked Hazel why the sudden participation after years of keeping their distance from anything official. She said simply, “We’re getting older.”

The closing speeches got off to a rollicking start with an animated and very funny Evan Manvel and some thoughts on Portland’s bike culture by Ayleen Crotty (of ORBike.com, Filmed by Bike, the KBOO Bike Show, and so on!). She also made a very nice mention of BikePortland.org. Thank you for that Ayleen. It means a lot coming from you. 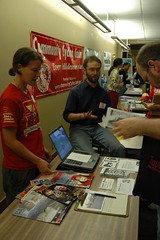 After watching an edited version of the amazing video about Copenhagen I posted about back in April, the Summit came to a close with City Commissioner Sam Adams.

Sam spoke about the challenge we face as transportation funding plummets and congestion increases. He also drove him an important point of how Portland is the third most trade-dependent region in the U.S. That being said, he encouraged us to work with, instead of against the freight community. He said:

“We’re running out of right-of-way. You (bikes and freight) need each other. Europe figured this out a long time ago.”

He also touched on the importance of establishing the bicycle industry as an official “Green” industry recognized by the city. I was especially psyched to hear that the lack of mountain bike trails has made it’s way into Sam’s head. He mentioned that,

“We need to do something with mountain bikes and we must bring the Parks Department to the table.”

I hope PUMP and the mountain bike community keep on this issue and maintain pressure where necessary.

Now I know Sam is a politician and he’s in front of a room of cyclists, but the one quote I won’t soon forget from the Summit was when he gave props to our creative, fun bike culture (instigated by Shift):

“Bike culture has worked it way into the consciousness of this City’s decision makers.”

Sam ended his speech with a rallying cry that now is the time to push the legislature for a gas tax. 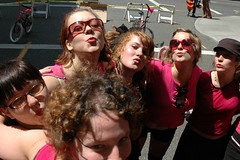 After the Summit wrapped up, we all hurried out onto Montgomery Street for a special Sprockettes performance (their first dry and sunny one of the year!). They looked great as usual. And, as usual I took a bunch of photos.

I chatted with them for a few minutes after their performance and then saddled up with the BTA for their visionary bike boulevard ride. We did a big tour of Southeast Portland stopping and discussing bikeway treatments along the way. The BTA is making a great move by getting grassroots input for their bike boulevard campaign.

I know this is a long post, but hey, it was the big day for bikes! Now our challenge is to maintain momentum and seize the moment!

What did you think about the Summit?

that bike summit was the greatest! thanks to the City and all the volunteers who put it on.

I want to give a big thanks to all the folks who came together and made this event happen. Linda, Timo, Sam, Earl, Mia, Elly, Ayleen, Jonathan, Roger, Jeff (all of you), and the dozens of volunteers who set up and cleaned up. I was very impressed by the amazing energy on Saturday and it brings hope for the future of Portland.

Under Mia’s very capable leadership the number of lane and bikeway miles jumped dramatically, but as she will tell you herself…they were mostly easy miles…wide ROWs, underutilized streets, etc. Now comes the hard part.
Her example of Lincoln in SE came about when the street was effectively closed to through auto traffic at 39th. Same with Clinton. And both of these streets have signaled crossings at 39th.
Most Bikeways…please let’s not call them Boulevards until they deserve it…have little or no restrictions on motor vehicles and offer little help in crossing many busy arterials.
Getting these gaps and barriers fixed are essential for attracting new riders, and will cost lots of money (Sam?, are you listening?)
The heavy lifting of the last 10 years has been Springwater Trail, bridge crossings and the Eastbank Esplanade. Is there a comparable “signature project” on the horizon?
I think the North Portland Greenway could be that kind of project, at least from Swan Island north to St. Johns. And why not make the Burnside Bridge two lanes in each direction with big wide European style promenade sidewalks for bikes and peds above the curb on that very scenic route.
Last, I hope Sam makes the speech about freight to the Portland Freight Committee; most bicyclist get it. Its the so-called freight advocates that don’t.

I was working all day Saturday but my heart was at the summit . . .

Jonathan, thanks again for the ceaseless work (not counting your well-deserved vacation) to bring timely and important news to the Portland bike community. Just one more reason that I love this city above all others.

Great summary of the event and the “good vibes” experienced by all in attendance. There are challenges and great results ahead for city and cycling based on the summit’s energy.

Lenny – another not insignificant project is the proposed 7th Ave crossing over I-84 in Sullivan’s Gulch.

Jonathan – I thought the bike summit was spectacular, and it was also a great opportunity to put faces to the names of much of Portland’s bike community. The workshops I went to were very informative and enjoyable, and the keynote speakers were eloquent and powerful in their messages. Sure, a lot of the early work that Mia Birk and others did was the easy miles – but without that we wouldn’t be positioned now to tackle the harder projects. As any cyclist knows, it’s much easier to pedal on when you have momentum, and with 267 miles of bike routes, this community has some serious momentum.