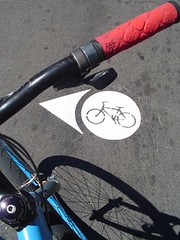 Bicycle boulevards are the Next Big Thing for Portland’s bike-friendliness. Both PDOT and the BTA are working on different projects to move the conversation and infrastructure forward.

While PDOT is forging ahead on an infrastructure level (recently asking for over $5 million for bike boulevards) the BTA plans to focus their efforts in a more grassroots way.

Their plan – just unveiled on their website a few minutes ago – will tap into $35,000 from private donors and a mini-grant from Bikes Belong to go out into the community to figure out just what a bicycle boulevard should look like. Here’s a quote taken from Evan Manvel on the BTA Blog:


“For the next two years, we’ll be talking to bicyclists about how to create beautiful, safe, low-traffic streets that cyclists love. From developing innovative design ideas to knocking on doors to ask where people want to bike, we’re hitting the pavement and biking the talk.”

Once they’ve gotten enough feedback, they plan to design a North/Northeast Portland Bicycle Boulevard Network Plan. They’re focusing on this area because, according to project leader Jessica Roberts,

“This area has many current and potential cyclists, but lacks a comprehensive high-quality bicycle boulevard network. New north-south and east-west routes in this area will increase bicycle ridership and safety.”

Great to see some focus up North, can you imagine if we (I live in North Portland) could mimic the success of streets in Southeast like Lincoln and Ankeny? I vote for Michigan Blvd!

Based on findings from their campaign and using funds from PDOT, the BTA is also giving themselves a goal of creating one new bicycle boulevard by 2008.

The reason the BTA is so bullish on boulevards is because they’re convinced that the main reason more people don’t ride bikes is because of proximity to high-speed cars and concerns for safety.

Planning for bicycle boulevards, which ultimately means discouraging car traffic on certain streets, can be tricky business. If you discourage cars on some roads, that means adjacent roads will see more car traffic. It will take careful planning to make this work and I’m glad to see the BTA plans to get out into the neighborhoods before making any decisions.

If this bike boulevards campaigns is successful, I think we should start talking about bike freeways ;-).

[Check out this front page story on bike boulevards in today’s Oregonian.]

Update: At 2 pm tomorrow (after the Bike Summit), the BTA will lead a community bike ride that includes visiting existing bike boulevards such as SE Clinton and SE Ankeny.

i think this is great, but i am a little sad the energy is all going to LOW-traffic bike blvds and not NO-traffic bike blvds. anyone who has seen streets converted to bike-and-pedestrian-only traffic (in europe or south america) can understand the beauty this brings. of course, the logistics are WAY more difficult (e.g. no one can have garages/parking off of it), but its nice to dream, no? *grin*

Some streets in NE which could be great Bike Boulevards are NE Going, NE Tillamook, and NE Skidmore. I have not been very vocal about bike boulevards in NE because most of NE (aside from Fremont and Broadway) is very comfortable to bike on. The only difficult areas are between Burnside and Broadway.

I agree about Skidmore, Going, and Tillamook, but what about good north-south routes?

I live near NE 7th and it already is a bike boulevard. There are lots and lots of bikers already using that street — just no bike infrastructure. It is used because it goes straight through from Lloyd Center to Alberta and is pretty fast and convenient (and the ridge between Fremont and Alberta isn’t as steep as farther east). I have a feeling that the planners would say that there is too much auto traffic on the street to make it a boulevard, but I’d like to see SOME effort made to accomodate all the people who already use side streets like this — maybe with sharrows or something? If there AREN’T too many cars on 7th (I don’t know what the cut-off is), then I hereby nominate it too to official bike boulevard status.

I agree, 7th would be a great bike boulevard. We often thought one side could be a oneway for cars and the other lane for bikes going either way. Three years ago we lived on 7th at Siskiyou. We moved because we couldn’t stand the car noise, drivers always hitting and knocking down trees, exceeding the speed limit and cops running cars off the street up onto the sidewalk. A friend had her Acura totaled on 7th in front of our house because a numbskull went around the traffic circle and rear ended her car. A neighbor two doors down also had her car totalled.
Still, I rode 7th every day to work and back. Cars could easily take MLK, and should, they use 7th to avoid the Fremont and MLK light which doesn’t have a turn signal and to fly down 7th almost nonstop all the way to Broadway. It’s a great biking street, not only does it go from Alberta to Broadway, but you can ride it to the end, at Lloyd St., or is it Irving? Then cut left to 12th, or right, down to the Katz Esplanade juncture (through hellish car centric traffic design). If 7th ever gets declared a bike boulevard or is closed to motor vehicles, I’ll know I’m having a psychotic episode.

If anyone wants to advocate for 7th being given some pro-bike attention by the city, email me at android@riseup.net

It’s almost entirely a residential street and I’ll bet most of the folks in the neighborhoods between Broadway and Alberta would warmly support our efforts.

I believe 7th Avenue is the route that will probably be used if an eastside streetcar is installed, which will ruin that street for bikes. We’ll need to be working on an alternative north-south route in the area in the meantime so we’re ready to advocate for it. I wonder if the Streetcar project could provide funding to develop a parallel route?

Hmmm. I thought that the bike lanes between Broadway and Oregon were staying when the streetcar went in. The streetcar will only be taking up one of the two lanes, plus there’s currently parking on both sides – it’s a pretty wide street.

Does anyone know the answer to this question? Is Chris Smith out there reading this?

Another thing: I know that the Lloyd District business association has been looking into the feasibility of putting a bridge over 84 at 7th. If that happens, people will definitely want to look at mitigation measures for the residential areas along 7th in NE above Broadway, as it will then be the only other through street other than MLK-Grand to go from Division to Alberta, which could create significant auto spillover. Better to get some bike infrastructure in there now…