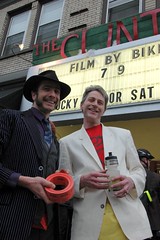 The bike stars shined bright at the fourth annual Filmed by Bike film fest that went down on Friday at the Clinton Street Theater. 550 people packed two shows (250 were turned away!) and the fest brought out everyone from a Metro Councilor to the Belligerante biker gang.

According to festival director Ayleen Crotty, the fest was “a raging success” and she’s already considering taking the show on the road to other cities in need of bike movie love.

The place was so packed that bike parking was nearly impossible for a one-block radius around the theater. I spoke to one couple who said they had to circle the block a few times to find a spot. 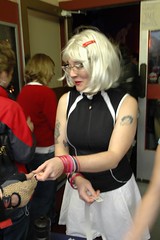 I didn’t stay for the late show, but I heard it was rowdy and crazy. “Bikakke”, a film that Bikestation honcho Todd Boulanger called, “Zoobomb-erotica”, wasn’t shown on the early show. It would have been fun to hear the crowd’s reaction to the film’s climax (if you saw it you’ll know why!).

All the movies were cool, but my personal favorite (it was tough to choose) was “Levin’s Bicycle” by Benjamin Parzybok. This was a subtitled ode about a philosopher’s deep and intimate relationship with his bicycle. People were getting hysterical and wish I had some of the quotes written down.

It was an awesome show and great event that had all of Ayleen’s typical flare. If you missed it, you can get the DVD from the Filmed by Bike website and definitely plan on showing up next year!

Photo conditions were tough, but here are the rest of my shots.

After the late show, about 60 people joined in on the Midnight Mystery Ride. This month’s rendition was led by Filmed by Bike poster artist Shawn Granton and ended up under the Morrison Bridge on the Eastbank Esplanade. Read the full report on Shawn’s great blog.

Great to hear it went well, but unfortuantly I missed it. When will they be shown again?

How did Bikkake look on the big screen? Alison shot it with my digital still camera in “clip mode”. I had other plans and couldn’t make it to the show.

Bikkake wasn’t shown at the first show only due to a technical glitch. I’m really sorry about that. We weren’t filtering it for content. It will be available for web viewing on the FBB website shortly.

Bikkake looked amazing on the big screen. Throughout the process of preparing the festival, I saw Bikkake probably 5 times, but I still enjoyed seeing it again on the night of the festival. I was pretty amazed when Alison told me it was shot on a digital still camera, the quality was excellent.

JASON – you’ll have to buy the DVD. There are no plans to show the films again but Shawn Granton and I are hatching a plan for the Pedalpalooza bike-in movie night that will NOT be the films that screened on Friday. Stay tuned to the FBB website for more info.

THANKS everyone who came out. It’s pretty incredible to see the cross section of people who came out for the night to appreciate the creativity of bikers.

That was indeed super fun — kudos to Ayleen.
Might be cool to see if the festival could do showings over 2 days next year. 200-some people were turned away, no?

I think this event is getting too big for the confines of the Clinton Street Theater. My wife and I tried to get tix and were turned away.

How about having the films screened at Cinema 21 or the Hollywood Theater next time? Both movie houses feature larger theaters that can accomadate more people. Also, what about showing the films the entire WEEKEND in lieu of just two shows on one night.

It takes a pretty special theater owner to welcome our crazy, fun crowd. Seth at Clinton Street Theater welcomes us and he’s great to work with, so I’m committed to keeping the festival there.

MURRAY – I’m sorry you and your wife were turned away. So were some 248 other people. If we had had room for everyone, we would have over trippled in size this year. And I was just hoping to sell out both shows! We sold out last year and had to turn just a few people away, so this year we put on a second screening. We had no way of knowing we’d turn away 250 people, but we did warn people it would sell out.

Filmed by BIke (like so many other local bike events – this is so exciting) is totally growing.

Rest assured, I have great plans for next year and I’m getting a lot of good suggestions.

For those of you who couldn’t get it or couldn’t make it, remember there’s that DVD which features great bonus material too. It’s for sale through the website.

Thanks for the response. I look forward to Filmed by Bike next year and really hope there will be more than two showings of the films. I am also quite appreciative of the Clinton Street Theater for taking on this very special and unique event.

Thanks for your hard work and dedication to this event as well.

well, crap, if they had to turn away 200 people why didn’t they do it for more than one night? maybe next year?

man, posting a response without reading all the other comments sure is a quick way to look like a moron.

and some how, etta, i knew you’d be the first person to point it out 😉