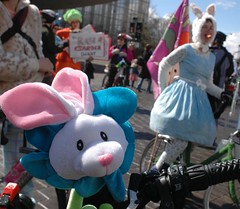 The third annual Bunny on a Bike ride was the most fun I’ve had on a bike all year. Imagine 150 people dressed like bunnies riding around the City, ringing bike bells, taking over lanes on bridges and stopping for live music and dance routines by the Bunny Cheer Squad. 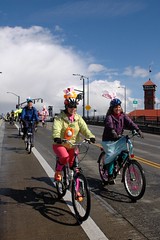 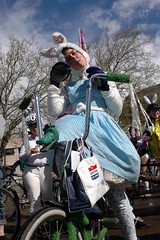 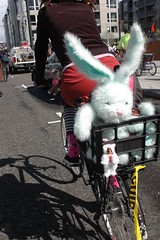 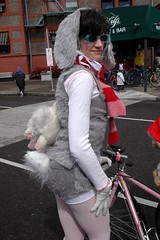 Led by the the lead carrot (Carye Bye), the route took us through car-free byways and paths that gave splendid views of the city we don’t often see. We went between Pearl District condos, through parks, along the riverfront, and over bridges. But even without the views, there was plenty to see on the riders themselves.

Bunnies of all shapes and sizes showed up. I saw ears made out of everything from condoms to duct tape. The weather cooperated by just sprinkling a bit at the start but staying sunny and dry for most of the ride.

Ride organizers planned several stops along the way including a jam session in front of the Memorial Coliseum and a snack break on the Eastbank Esplanade (carrot cake muffins anyone?).

I took over 250 photos, cut that down to 141, then made a final selection of 61 that made the gallery. They tell a much better story than I can write…so go check out my Bunny on a Bike Photo Gallery.

Big thanks to Carye Bye and her fearless band of creative, bikey bunnies for putting this together!

omigosh…Carye’s outfit reminds me of Tottie’s get-up in the closing scenes of Curse of the Were-Rabbit! Coincidence?

Jonathan, what a wonderful write up. And the photos are amazing!

Patrick – It’s true, that Tottie’s Carrot dress in the Wallace & Gromit movie was indeed my inspiration – and the visual look of 100s of bunnies on bikes ‘chasing’ a carrot made me laugh.

Yay for everyone who came out, dressed up, and had fun.

More photos of bunnies on bikes:
From Ethan Jewett
From Dat Nguyen

The sad bunny with the flat was me. But the sun came out, the Bike Gallery hopped to it and had my tube fixed by the time I had stripped down to my bunny bike togs, and I rejoined the group in time for carrots at the foot of the Hawthorne.