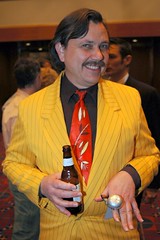 On Saturday night the Bicycle Transportation Alliance (BTA) held its 11th annual Alice Awards at the Oregon Convention Center. The sold out event hosted 600 Oregon bike advocates, politicians (past and present), industry leaders, and business owners. The event was a fundraiser for the BTA and a chance for them to honor Oregon’s “bike heroes.”

Here’s a few highlights from my perspective: 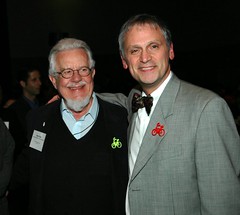 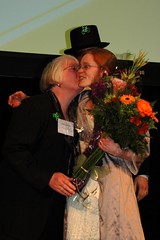 [Brita Johnson and her mom.]

And a few lowlights (tiny things, given the great success of the night overall!):

The BTA was the big winner on the night, raising thousands of dollars for their work, but here are the winning bike heroes that won Alice B. Toeclips awards:

Check out the rest of my photos in the Alice Awards photo gallery.

Thanks for telling the story of the Alice awards, Jonathan! It was a night full of great energy and wonderful faces from all corners of the bike community.

To your comment about the bike parking – I agree that it was subpar. The way the Convention Center works, it would only have been possible for the BTA to provide our own bike parking if we had it brought in on Saturday afternoon AND picked up again that night (nothing can stay on site overnight) – most companies won’t do that, so we’d have had to truck it in and out ourselves, and didn’t have the capacity to do that this year. We did ask about indoor bike parking, but that garnered a big fat NO.

To the Convention Center’s credit, they do provide covered bike parking in the parking ramp, and they have a map showing the location of that parking, plus the racks around the outisde of the building. And they did try to accommodate, by providing the outdoor bike parking themselves. If the BTA holds the Alice awards at the Convention Center again next year, I’ll recommend some research into other options. Maybe partnering up with some friendly outside entity to provide the bike parking… 🙂

Here’s a list of all the Alice winners with more information about what makes them bike heroes.