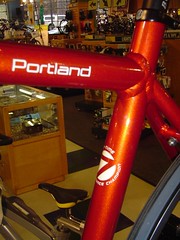 Yesterday I got a call from one of my intrepid correspondents (thanks Dat!) that the downtown Bike Gallery has just received shipment of the very first Trek Portlands. Today I went down to investigate and sure enough, they’ve got two of them (a 52 and 54 cm) already in stock and they expect more to arrive soon.

They look pretty much the same as when I first reported on them, the major difference is that they now have a triple chainring instead of a double compact. Mike (the sales guy I spoke with) said they did this to speed up delivery.

It looks to be a solid all-season road bike, especially good in the rain with mega tire clearance, disc-brakes, and fenders. Speaking of which, the coolest thing on the bike are the fenders. They’ve got a cool quick-release mechanism that is solid and super easy to use.

It may not be the perfect Portland bicycle, but it’s cool that the world’s biggest bike company has named a bike after us.