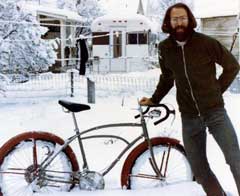 The Mountain Bike Hall of Fame has recognized Portland resident Bob Crispin’s 1975 “Tankagnolo” as the “first mountain bike with a disc brake.” The bike is now on display at Portland’s first bike shop, 80 year-old Weir’s Cyclery in St. Johns. 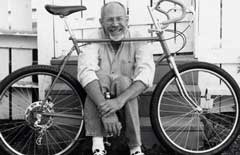 Bob built his first Tankagnolo (there have been 3 versions) from a Schwinn Varsity ten-speed frame and added the unique features of a Shimano disc brake and alpine gearing for riding in the snow and dirt roads around his home in Spokane, Washington.

Here’s a great excerpt from an article on the bike from Bike World Magazine in 1978:

“I feel the world should know that it is possible to do. The bike turns railroad tracks and other city bumps into a velvet touch. It’s a Cadillac of bikes, both in feel and looks. With its trailer it becomes a workhorse also.”

Crispin suggests that anyone who desires such a machine get an old frame and parts, some welding gear to heat and widen the frame and have at it. It is worthwhile and also guaranteed to bring lots of laughs from the critics, he said.

Check out this detailed story about the bike on the Weir’s Cyclery website.

My Dad had one of those JCPenney bikes with the disc brakes. It hung from a rafter in our garage for over 10 years. When my friends and I got to the age where road cycling was ‘cool’ we noticed what a potentially lean racer that JCPenney’s 10 speed was. It clearly was meant to go fast: it had shifters on the down tube! And one of the brakes didn’t have the dorky lever which allowed braking from the top of the handle bars. We quickly attacked it and threw away the disc brake and other misc heavy and superflous components.

Ugh. Such a shame.

And Bob can be seen often riding the streets of North Portland, delivering the St Johns Review, a monthly local paper,by bike,

West Cougar and all – Great story about the JC Penney road bike. If you had the brake, I would buy it from you to build another Tanko. If anyone out there has a Shimano disc brake from the early sevenies, I would buy it. I am also looking to buy copies of the May/June 1978 issue of Bike World, where my story first appeared. I have two copies now and would like more. Great story about the JCP bike !! – Mr Bob (Crispin) at pambob@pcez.com

Has anyone rode a Surly Pugsley. I rode one at the Interbike demo days and kept going back for more. The bike rides like it is suspended and is much more nimble than its 26×4 tires would appear to be. I sat at the booth and watched others ride it too. They all came back with child like grins and said “I want one”. My motto for the bike is “Dont find your line, make one”. I think they should name the bike the “Bob Marley”, as it has two fatties on it and it makes one high.
– Tankagnolo Bob

I’m looking for Bob Crispin of Pre-MTB Tankagnolo design. Bob was a Cycle America Coast-to-Coast trip angel of mine several decades past. He’s in my heart always. On your left, Mister Bob. I’m quite certain you’re still an angel for many more since you were mine. If there is a heaven you’re there. Dog bless, Joyce, fading red.