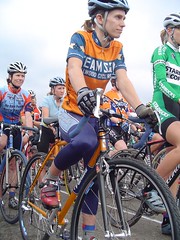 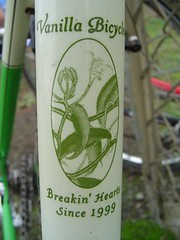 Vanilla Bicycles, a small Portland-based framebuilder is supplying bikes to some of the best cyclocross racers in the country. In the current standings of the US Gran Prix of Cyclocross Rhonda Mazza (shown in photo) is currently ranked 6th in the Elite Women’s field and Shannon Skerritt is ranked 7th in the Men’s Elite field.

Another Vanilla rider, Molly Cameron is riding very strong in her first year as a pro and is currently ranked 32nd in the Elite Men’s field (read Molly’s great race reports on her blog!).

These riders are up against teams from the largest bike companies in the world like Kona and Giant.

A former bike messenger and relative newcomer to the custom framebuilding world, Sacha White has carved out a reputation as one of the best. His eye for aesthetic detail and finish, combined with technical precision and an appreciation for classic lines has won his bikes many fans and races [Disclaimer: I’m biased because Sacha is a friend and a client.].

At last year’s Handmade Builders Show – a gathering of the best small framebuilders in the country – Sacha took home two awards including “Best in Show”.

Yet despite a worldwide following and a 2 year waiting list, Sacha is still one of the most relaxed, cool people you’ll ever meet.

For more Vanilla lovin’ check out these photos from the open house he had this summer during Pedalpalooza. You can also see all my Vanilla photos here.

You could also mention the fact that Rhonda, Shannon and I are paying our own way, compared to the “big boys” who get company money for race and travel. It is an acceptable trade off. To ride for an amazing small company as opposed to a bigger corporation. Not that Kona and Giant are evil corporations but, I get a huge sense of satisfaction knowing that by racing for Vanilla I directly support a good friend’s framebuilding business and his family. Buy local, think local.

You are right about his eye for aesthetic detail; I love these bikes. Vanilla really is the best of all the custom framebuilders that I have seen in the use of color and graphics. Good job building a recognizable and likable brand so quickly.

Someone in my building has a vanilla bicycle…i’ve spied it a couple of times on the bike rack…it is truly one of the most beautiful bikes I have ever seen. one day, I will have my own!!

p.s. I also hope to have my bike painted by Dean Cannard of Acme Paint shop..his wait list is so long, i should sign up now! ha!