I’ve just posted some interesting charts from the City of Portland Office of Transportation on my new “Bike Safety” page if you’re into that sort of thing.

Here are the titles of the charts: 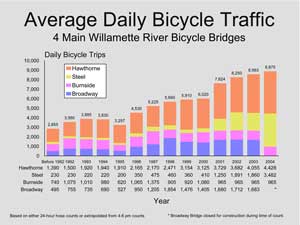 Some of these statistics are a bit misleading. I have been hit 2 times in the past 3 years and both times was informed it was not worth reporting these accidents to the PPD. Are these accidents only those where someone has to be carted off in an ambulance?

James, I’m afraid that’s often the case. Reported crashes generally come from two sources: the police file a crash report for serious crashes resulting in “trauma” to one or more parties, or those involved in a crash file a crash report themselves with the Department of Motor Vehicles. Many crashes fall below the radar screen because either the cyclist was not considered to have suffered a serious trauma, or those involved in the crash didn’t bother to file a report.

Portland’s Office of Transportation is currently working on a system that would allow cyclists to report crashes and near misses so we could have a better sense of the full picture of motorist-bicycle interactions. Stay tuned.

What Roger says is true, and I don’t want to downplay the fact that we do need to get more info. Nevertheless, I’d point out that we can say with confidence that the charts represent real, measurable trends–we’re comparing apples to apples by getting the same level of data year after year. That means I still feel comfortable telling people, for example, that our crash rate is clearly falling as more people ride.