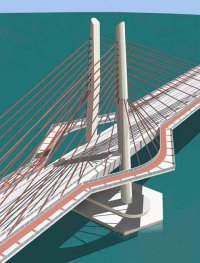 Once it’s built, TriMet’s Milwaukie Light Rail bridge over the Willamette River will be the first in the country to carry only light rail and people on bikes and foot (no cars).

What will the actual bike and pedestrian facilities look like?

TriMet is currently working out design details with their new architect on the project, Donald MacDonald. At a recent bridge design meeting, MacDonald unveiled some interesting drawings of what the new bridge might look like. Also, TriMet’s bridge team offered details on the project to the City’s Bicycle Advisory Committee last month.

Jeff Jahn of PortlandArt.net was at a recent design meeting and has covered the design talks closely. He says MacDonald has been touting the bridge’s bike and ped facilities as possibly being some of the best in the world.