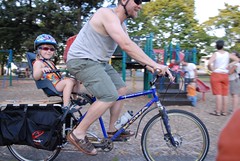 Jeff Lauten, shown here with his
daughter at the site of the future Harper’s
Playground, where he hopes to donate a
paving stone with his club’s name on it.
(Photos © J. Maus/BikePortland)

The Unicycle Bastards, a local unicycle riding club, wants to help build Harper’s Playground in north Portland’s Arbor Lodge Park. The group came up with $260 to purchase a paving stone in the forthcoming playground; but their request was denied when Portland Parks & Recreation felt uncomfortable with printing the word “Bastards” in a children’s area of the park.

Jeff Lauten, a 47-year-old Overlook Neighborhood resident and member of the Unicycle Bastards, says they think it’s unfair. “We’re just a small, old, silly group of unicycle riders,” he told me on the phone last week. “We love Harper [the young girl who the playground is being named after] and the playground and we just wanted to be a part of it.”