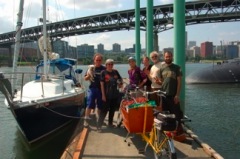 Part of the farm-bike-boat delivery team at
last year’s Village Building Convergence on
the dock at OMSI.
(Photos courtesy of CultureChange.org)

Jan Lundberg moved to Portland a year ago because it seemed like the best place to pursue his intersecting passions for food security, peak oil, bicycles, and sailing.

These passions will be coming to fruition later this month when the oil analyst’s brainchild, the Sail Transport Network, will launch into its first major, ongoing local venture. Lundberg is finalizing plans to deliver malted grain from Vancouver, Washington to a brewery further down the Columbia River by a combination of cargo bike and sailboat. 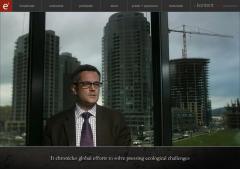 Mayor-elect Sam Adams in a screen
grab from an upcoming PBS series.

Portland is set to be featured in an episode of a PBS television series about the “economies of being environmentally conscious”.

The series, e2 transport, is in its third season. The Portland segment is titled: Portland: a Sense of Place. A trailer for the series — which is being shot in high-def and has a very impressive, cinematic feel (meaning, this is no dry and wonky series) — U.S. Congressman Earl Blumenauer, Mayor-elect Adams, and others are interviewed.

52% of California voters said yes to a proposition that helps fund a $45 billion “bullet train” between Orange County in the south to the San Francisco Bay Area.

This was a closely watched vote by transportation advocates nationwide because, if built, it will be the first project of its kind in America.

While driving (alone) down to a conference in Eugene a few weeks ago, I wondered why there was no such service from Portland to points south. Amtrak’s got their Cascade Corridor, but at 2.5 hours (if it’s on time) and $26.00 for a ticket, it’s hardly a competitive option.