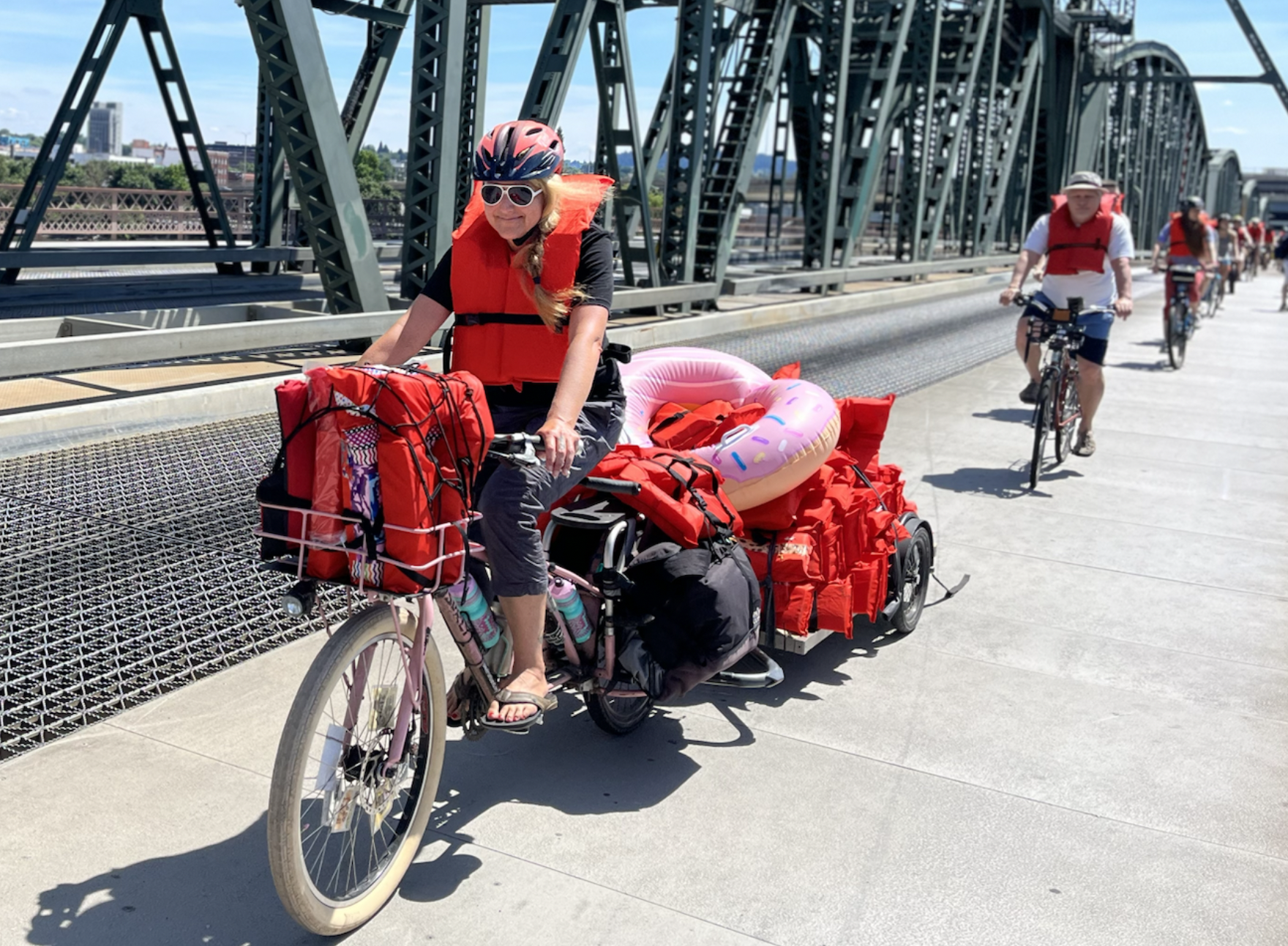 A dip in a cool river on a hot day feels so much more refreshing after a bike ride. Thanks to Portland transportation advocacy groups The Street Trust and Bike Loud PDX, those inclined to bike to the river for The Big Float could arrive in style and show fellow floaters that biking to the river is the best way to get there.

I tagged along with The Street Trust Sunday on their ride from the hot Lents Town Center to the refreshing Willamette River for the event. We rode about six miles, with The Street Trust’s Madi Carlson (who was lugging a cargo bike full of life vests) leading the way, before meeting with a group of cyclists from Bike Loud, who had their leader Kiel Johnson carrying another impressive bundle of life vests on his cargo bike. Together we created a bike parade across the Hawthorne Bridge, waving to the beachgoers below who were preparing to hop on their floats for the 10th and final Big Float.

The Street Trust chose the Lents Town Center as their meeting spot because it’s one of the places in Portland where residents suffer the most during heat events. A lack of tree canopy coverage and a wealth of asphalt turn this area into an urban heat island (read more about this here). Juxtaposed with the cold Willamette, the heat in Lents becomes even more apparent.

The Big Float is an event the Human Access Project (HAP) has put on annually for the last 10 years to promote their mission of making the Willamette a swimming space open to all and “helping people embrace, cherish, and preserve our river.” This was the HAP’s final Big Float, though their river advocacy will continue.

For a city with limited outdoor swimming pools, Portlanders sure have some excellent floatation devices, so see if you can find your favorite and get inspired to appreciate our beautiful river. 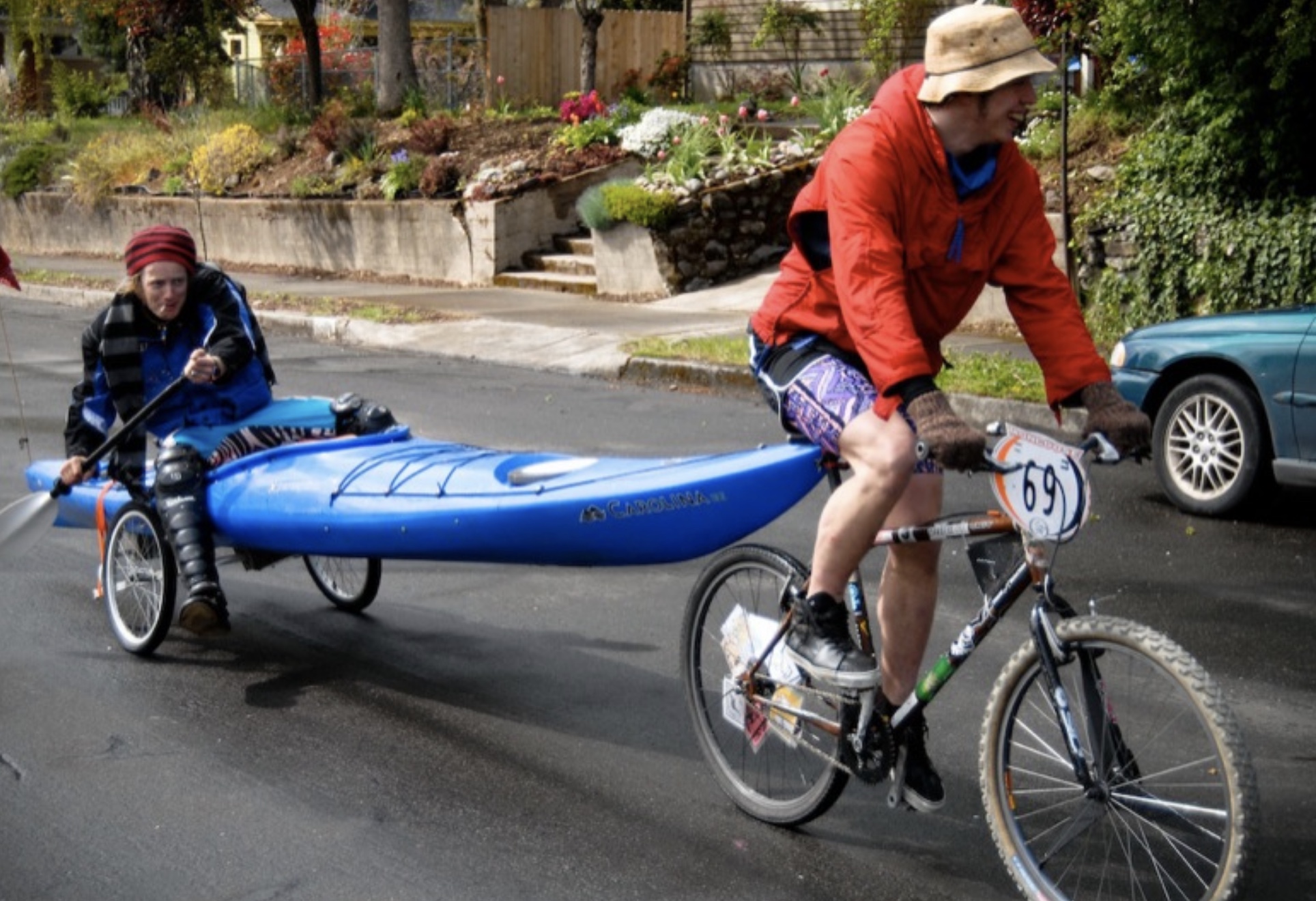 If you love cycling and great cities, The Big Float is a much bigger deal than it first appears.

On the surface, the event that celebrates its 10th birthday on Sunday in Tom McCall Waterfront Park, is just a big party where everyone hops into the Willamette River. But if you look deeper, you see that the event was launched by a public space activist who wanted to change the narrative about how and where we access our beloved river.

For Human Access Project Founder Willie Levenson, being able to easily go for a swim in the Willamette says a lot about Portland. “To me,” he said in a phone call a few days ago, “the test of a truly green city is that you can bike to a river and swim.”

And if you think Levenson is just shilling for his big event this weekend, you don’t know him very well. As leader of HAP he’s pushed for bike racks at Duckworth Dock on the Esplanade and more recently spearheaded an effort to create an entirely new park off the Burnside Bridge that would be accessible by a bike ramp (not a horrible elevator like Multnomah County wanted).

So it should come as no surprise that at Sunday’s Big Float, HAP wants to make sure as many people arrive by bike as possible.

HAP has partnered up with Bike Loud PDX and The Street Trust to plan two rides that will gather floatie-adorned cyclists from northeast and southeast to make a grand, mass entrance to Waterfront Park. The groups have free tickets available and Levenson says they’ll have an air compressor on-hand to make it easier for folks to carry inner tubes and other flotation devices by-bike. There will also be a bike valet with secure parking for your precious steed.

And there’s no party ride without music, so if you can show up with a mobile sound system and help out with some tunes, you’ll receive a free drink ticket and t-shirt.

If you’ve been inspired by our recent bike-to-paddle stories, this is a perfect opportunity to go for it!

You can just roll over to Tom McCall Waterfront Park on Sunday or join one of these rides: 10:30 am at Irving Park (hosted by Bike Loud PDX) or 10:00 am at Lents Town Center (hosted by The Street Trust).

See you on the river.