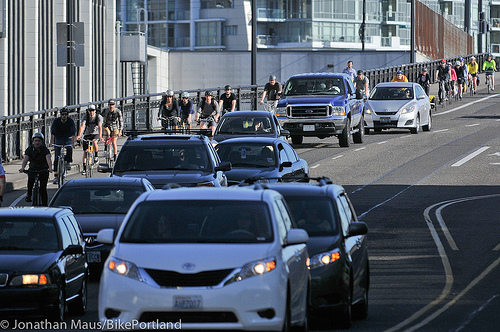 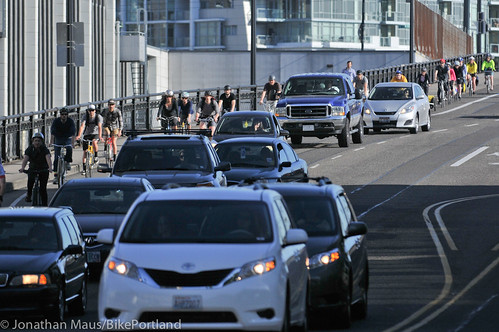 Don’t worry! Those cars are driving themselves.
(Photo: J. Maus/BikePortland)

Hoping to get out in front of what many see as an inevitable tidal wave in vehicle technology that will transform our streets, the City of Portland has announced the Smart Autonomous Vehicles Initiative (SAVI).

The announcement was made this morning at the Portland Business Alliance’s April Forum Breakfast event. Mayor Ted Wheeler and City Commissioner Dan Saltzman spoke at the event and formally launched the initiative via the Portland Bureau of Transportation (which Saltzman oversees). By the end of this year the city will develop a suite of policies and review proposals from private companies that want to test AVs on Portland streets.

“My goal is to have an autonomous vehicle pilot program in Portland, working for Portlanders, by the end of the year,” Wheeler said in a statement. “To the inventors, investors and innovators, I’m here to say that Portland is open for business. By working with private industry, we can make sure that cutting edge technology expands access to public transit and reduces pollution and congestion.”