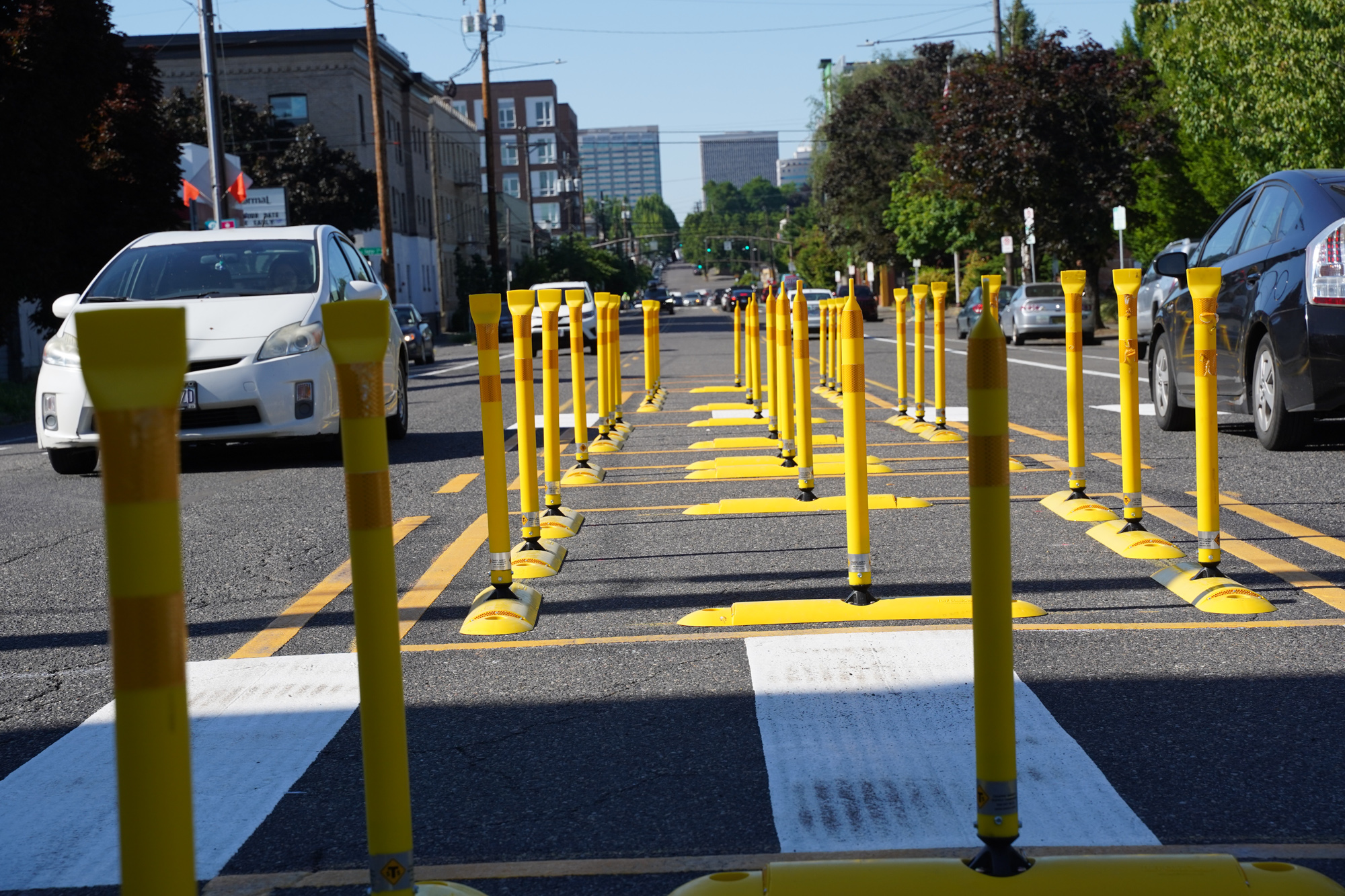 One of Portland’s most important bike streets has received a big upgrade. The intersection of SE Salmon and 7th now has a full median made out of bright yellow plastic curbs and wands. There are also two new striped crossings and all four curbs have been bumped out.

The new median was installed mainly to discourage car drivers from using Salmon as an alternative to the larger SE Hawthorne Blvd, which is just two blocks over. After the transportation bureau restriped Hawthorne with fewer driving lanes in early 2021, they wanted to make sure people didn’t use Salmon as a cut-through to avoid congestion.

In addition to preventing drivers from crossing 7th east to west, the median also prevents them from turning left from 7th onto Salmon. The new media and curb extensions also improve safety for walkers and rollers who use the popular route to access the Eastbank Esplanade and southeast Portland neighborhoods.

The presence of the wands and curbs calms traffic and makes it more likely people will drive more slowly and stop for people waiting to cross.

According to PBOT, the project cost just $15,000 using these temporary materials and they plan to replace it with higher quality concrete curbs and other features in the coming years once they build the full SE 7th Avenue project that’s called for in the Central City in Motion plan. That project will make a number of upgrades to the bikeway on 7th between SE Division and Stark, including new signals, crosswalks, and wider bike lanes.

“The temporary materials [at Salmon and 7th] allow staff to evaluate if this is the right crossing improvement for both the SE 7th and SE Salmon corridors,” PBOT’s Interim Communications Director Hannah Schafer shared with us today.

The project is also part of PBOT’s effort to improve the Salmon greenway with better connections between the Willamette riverfront, through the Central Eastside Industrial District, and inner southeast neighborhoods.

Later this fall, PBOT will break ground on the related Central Eastside Access and Circulation project that will add long-awaited traffic signals to Salmon at SE Martin Luther King Jr Blvd and Grand.

Hami Ramani, a local bike advocate who volunteers with BikeLoud PDX, said he’s happy to see it. “We’ve been waiting for this for a while and I think it’s going to complement the rest of the work at MLK and Grand.” While Ramani isn’t a fan of the temporary aesthetic, he thinks the visual distractions for drivers will slow them down. “Overall, I think it’s a good thing,” he said.

One issue that I saw pop up on Twitter is that, without an accessible center turn lane, bicycle riders going north who want to turn left onto Salmon will now have to make a slower and more awkward approach.

While I observed the intersection for several minutes Wednesday night, it seemed to work well. Drivers stopped nearly every time a walker or biker was present at the corner.

Have you ridden through this yet? What do you think?