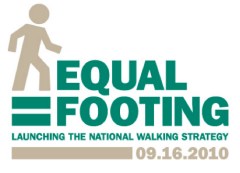 A partnership of national advocacy organizations, led by North Portland resident and former executive director of the Bicycle Transportation Alliance, is attempting something that has never been done in America: galvanize a powerful grassroots walking movement. 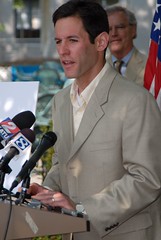 Scott Bricker, the former executive director of the Portland-based Bicycle Transportation Alliance has been hired by non-profit America Walks, a national coalition of pedestrian advocacy groups.

Bricker, who was let go by the BTA back in November, is now working as a consultant. With his new contract position as Campaign Manager with America Walks, he’ll be responsible for managing their Walking Wins Summit that will be held during the annual Pro Walk/Pro Bike conference coming to Chattanooga, Tennessee in September. 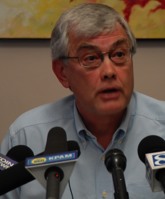 I got in touch with BTA executive director Scott Bricker today to ask him about how their recent shift in personnel would impact their 2009 legislative agenda.

On Friday, I reported that the BTA’s government relations and public affairs director Karl Rohde had been abruptly let go, just as the legislative session was heating up. Earlier today, I reported that Bricker had already stepped into Rohde’s role as the BTA’s sole lobbyist in Salem (a role that Bricker had done for years before coming the executive director in 2007).

“Expanding the freeway and constructing six new massive interchanges will do tremendous damage to the bike friendliness of communities around the project.”
— From a press release issued today by the BTA

The Bicycle Transportation Alliance (BTA) issued a statement today in opposition to the Columbia River Crossing project. The statement is by far the BTA’s most strongly-worded criticism yet in the 18 months they’ve been tracking the project.

After Mayor Sam Adams and Portland City Council (and soon thereafter the Project Sponsor’s Council) voted in support of building the new I-5 bridge to a size that could accomodate up to 12 lanes, many BTA members and others in the community felt like the project had taken a major turn for the worse. 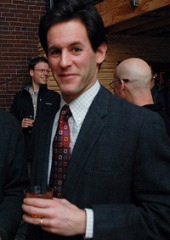 “… it’s less about the number of lanes, per se, and more about the impact on the community.”
— Scott Bricker, executive director of the BTA

This week’s decision by City Council to authorize Mayor Adams to vote in favor of a 12-lane Columbia River Crossing bridge has sparked outrage among many Portlanders. Several comments here on BikePortland have turned into an effort to organize a rally to express concerns about the bridge and disappointment in Mayor Adams and City Council.

Meanwhile, the Portland Mercury has reported on the reaction to Adams’ decision by local green and environmental groups: