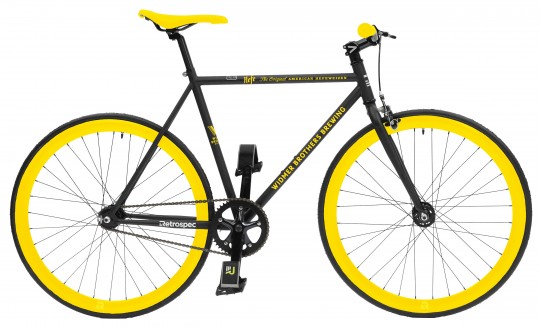 Widmer’s commemorative bike designed in the spirit of their flagship Hefe beer. 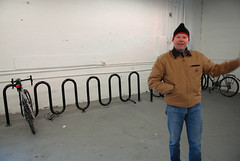 Widmer Brothers Brewing is well-known for their Hefeweizen beer and for being one of the nation’s pioneering craft brewers. But perhaps less well known is their commitment to the growing number of their 150 Portland employees who ride their bikes to work.

At their North Portland headquarters (on Russell Street off of N. Interstate Ave), Widmer just finished up a major expansion project. Along with more beer storage space, offices, and keg-filling capacity, they also added an entire building devoted to bike parking. 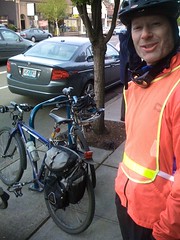 Rob Widmer finished ahead of his
brother Kurt — who drove the silver
Acura in the background.
(Photos © J. Maus)

May is National Bike Month and this morning the City of Portland’s Transportation Options Division kicked off their festivities with a bike/car commute challenge.

The event pitted Rob and Kurt Widmer (founders of Portland-based Widmer Brothers Brewing) against each other to see who would get from NE 18th and Broadway to City Hall — a distance of about three miles — first.