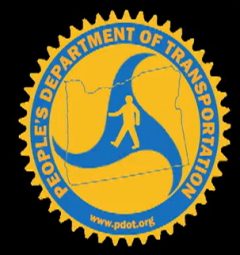 According to a statement just released by the People’s DOT, this Friday during the evening rush hour teams of volunteers will help citizens cross 82nd Avenue at crosswalks at and near the transit center adjacent to the new wall. PDOT is encouraging people to show up dressed in costumes. An email recruiting volunteers to help with the action said, “suggested attire is an orange jumpsuit, formal dress, or a chicken suit.”