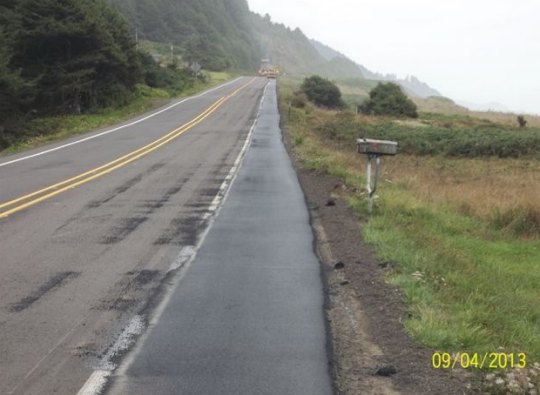 In the latest twist to the ongoing saga of the Oregon Department of Transportation’s (ODOT) problematic paving job on Highway 101, a regional manager announced today that they’ve already made significant progress in making it better.

As we first reported last month, ODOT came under fire after a Portland man (who also happens to have over 30 years experience at the Portland Bureau of Transportation’s bike program) raised alarms about dangerous paving on the Oregon Coast Bike Route. In order to cut costs on a repaving job south of Florence, ODOT contractors placed a new layer of pavement just a foot or two over the fog line. The new layer of pavement left a ledge smack dab in the middle of the shoulder where people ride bicycles on the popular touring route. After a bit of digging, we learned via ODOT Region 2 Manager Sonny Chickering that this repaving job was done in 2011 after a new policy went into place outlawing the practice. That new policy went into place specifically as a bike safety measure. 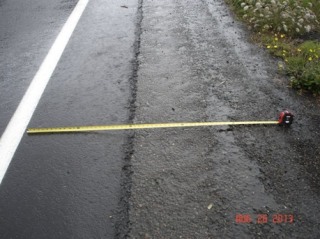 A regional manager with the Oregon Department of Transportation (ODOT) has responded to a paving issue that was brought to the agency’s attention last week because of its impact to bicycle safety. ODOT Region 2 Manager Sonny Chickering says he is already looking into taking corrective measures to repair the dangerous seam left behind from a paving overlay project on several miles of the Oregon Coast Bike Route. Chickering also forwarded a new page on the ODOT website that addresses this issue directly.

As we reported last Monday, Jeff Smith, a 30-year veteran of the Portland Bureau of Transportation, was riding the Oregon Coast Bike Route on Highway 101 south of Florence when he was “gobsmacked” at what he called an “inept” repaving job. He emailed ODOT (and cc’d dozens of his contacts) a photo and description of several miles of the highway where a new layer of pavement extended only half-way into the shoulder. The new layer of pavement left behind a rough ledge running right in the middle of the bicycling area. 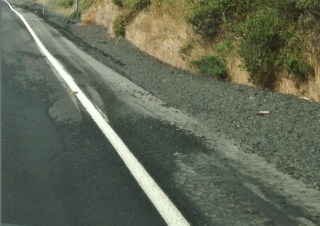 Shoulder on Oregon Coast Route north of
Gold Beach after an ODOT repaving job.
(Photo: Sent in by reader)

As we reported on Friday, the Oregon Department of Transportation (ODOT) has repaved many miles of state highways in a way that shows complete disregard for bicycling and creates unsafe conditions on some of Oregon’s premier bicycle touring routes. The situation occurs when a new layer of pavement is applied over an existing road. Instead of laying it down across the entire width of the road and shoulder, ODOT (and/or their contractors) are only going about 1-2 feet from the fog line. This is leaving a gravel mess in some cases, as well as what one commenter called a “death ledge” between the old and the new pavement that is placed smack dab in the middle of where people ride. This ledge could force people to ride even closer to the fog line, which puts them even closer to fast-moving cars and trucks on roads that already lack adequate bicycle safety treatments.

ODOT is currently looking into the issue and we expect a formal statement sometime this week.

However, since our story was published, we have heard that the paving problems are much more widespread that just on one section of the Oregon Coast Bicycle Route. In addition, by not applying the new pavement layer across the entire shoulder ODOT (and/or their contractors) may have skirted their own pavement design guidelines. 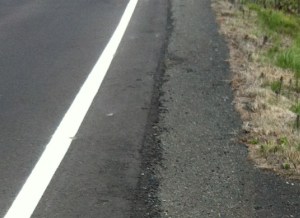 ODOT failed to extend a new layer of pavement
into the bicycle riding area of a long
stretch of Highway 101.
(Photo: Jeff Smith)

A recent repaving job by the Oregon Department of Transportation on the popular Oregon Coast Bike Route on Highway 101 between Yachats and Florence has raised eyebrows among veteran bike tourers, transportation department staffers, and national bicycle advocacy organizations.

It all started with an email sent yesterday from Jeff Smith, a veteran Portland Bureau of Transportation employee and a bike touring enthusiast, to ODOT’s Bicycle and Pedestrian Coordinator Sheila Lyons. Smith — who sent the message from his personal email account and not as a PBOT employee — included a photo and a detailed description of what he called an “extremely annoying at best and dangerous at worst” section of repaving.

According to Smith, a 25-mile section of the popular Oregon Coast Bike Route from Yachats south to Florence has been re-constructed with a new layer of pavement that abruptly ends just a few feet past the fog line. Here’s more from Smith’s email: