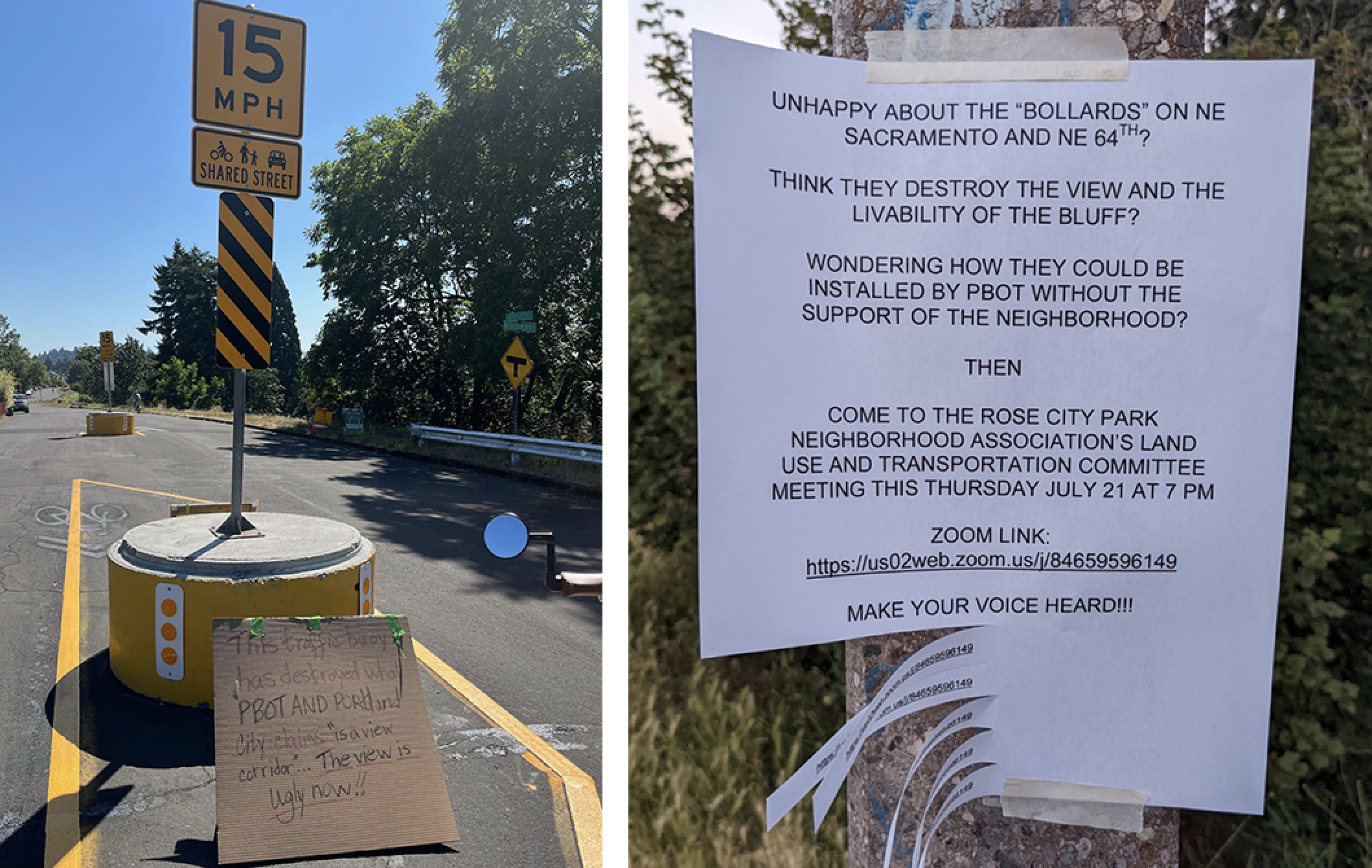 Another neighborhood association is taking the City of Portland’s transportation bureau to task over a traffic-calming project.

An 10-block section of Northeast Sacramento Street west of 60th has become one of Portland’s most people-centric, calm and quiet streets for many reasons. Part of its appeal is organic — the low-volume, neighborhood street is perched on a ridge above a big golf course and boasts excellent views. But the Portland Bureau of Transportation has also had a big hand making this a destination for bikers, walkers, and rollers of all kinds.

When the pandemic first began, we highlighted NE Sacramento as one of the streets where droves of Portlanders flocked to for some much-needed exercise and social interaction. It was one of the first streets the Portland Bureau of Transportation targeted for their nascent Safe Streets campaign. Then in May we reported on how PBOT doubled-down by adding paint, plastic curbs and wands, large concrete barricades (which are planters turned upside-down), and “15 MPH Shared Street” signage to the excessively wide intersection of Sacramento, 64th and Brazee.

These traffic-calming additions have helped solidify NE Sacramento as a low-car street that, from my perspective (as someone who bikes through it somewhat regularly), were a big success. But now I’ve learned that some nearby residents strongly object to the changes.

Two large, hand-written cardboard signs placed on a pair of newly-installed concrete barriers at NE 64th and Sacramento read: “This traffic has destroyed what PBOT and Portland city claims ‘Is a view corridor’… the view is ugly now!!!”

When I posted a photo of the sign on Twitter yesterday, another reader shared a flyer that’s been posted that expresses a similar sentiment:

“Unhappy about the ‘bollards’ on NE Sacramento and NE 64th? Think they destroy the view and the livability of the bluff? Wondering how they could be installed by PBOT without the support of the neighborhood? Then come to the Rose City Park Neighborhood Association’s Land Use and Transportation Committee meeting this Thursday July 21 at 7pm. Make your voice heard!!!”

A quick glance at the May 2022 Rose City Park Neighborhood Association (RCPNA) newsletter (the most recent one available on their website) tells us that their board weighed in on this project at their April meeting. The RCPNA Board recommended to PBOT that they install the concrete barricades without the signage mounted on top. They also said there should be “No easterly bollard installed as it would interfere with the established view corridor.” At the RCPNA’s May Land Use and Transportation Committee meeting, it was clear by comments made by board members that a lot of residents who live on/near Sacramento object to the aesthetics of PBOT’s work and want something more “visually appealing”.

There’s seems to be a big mix of opinions from neighbors. According to what I’ve heard from LUT Committee member Ben Joy in a May 2022 meeting, some people think the changes have actually made the street less safe, others like the idea behind it but just think it looks terrible and hurts their property value, and others are very supportive of the project and are grateful for PBOT’s work.

There’s a long and frustrating legacy of neighborhood objections to PBOT traffic calming projects. Just yesterday we reported on how the Beaumont-Wilshire Neighborhood Association is fighting a PBOT diverter on the grounds that it causes inconvenience for drivers and isn’t necessary at all. In that case, city staff have made it clear that neighborhood associations do not have veto power in these matters.

Rose City Park’s main objection to the project on Sacramento is more novel. I have never heard a neighborhood group use view corridors as a reason to protest a traffic calming project.

“The view is anything but ugly,” wrote the reader who emailed us photos of the sign. “Strange how something so relatively unobtrusive, which will enhance the enjoyment of the street and area for more and more folks, is met with such immediate overblown consternation.”

We’ll learn more about the neighborhood’s objections at their meeting tomorrow. See the RCPNA calendar or just save this Zoom meeting link if you’d like to attend. 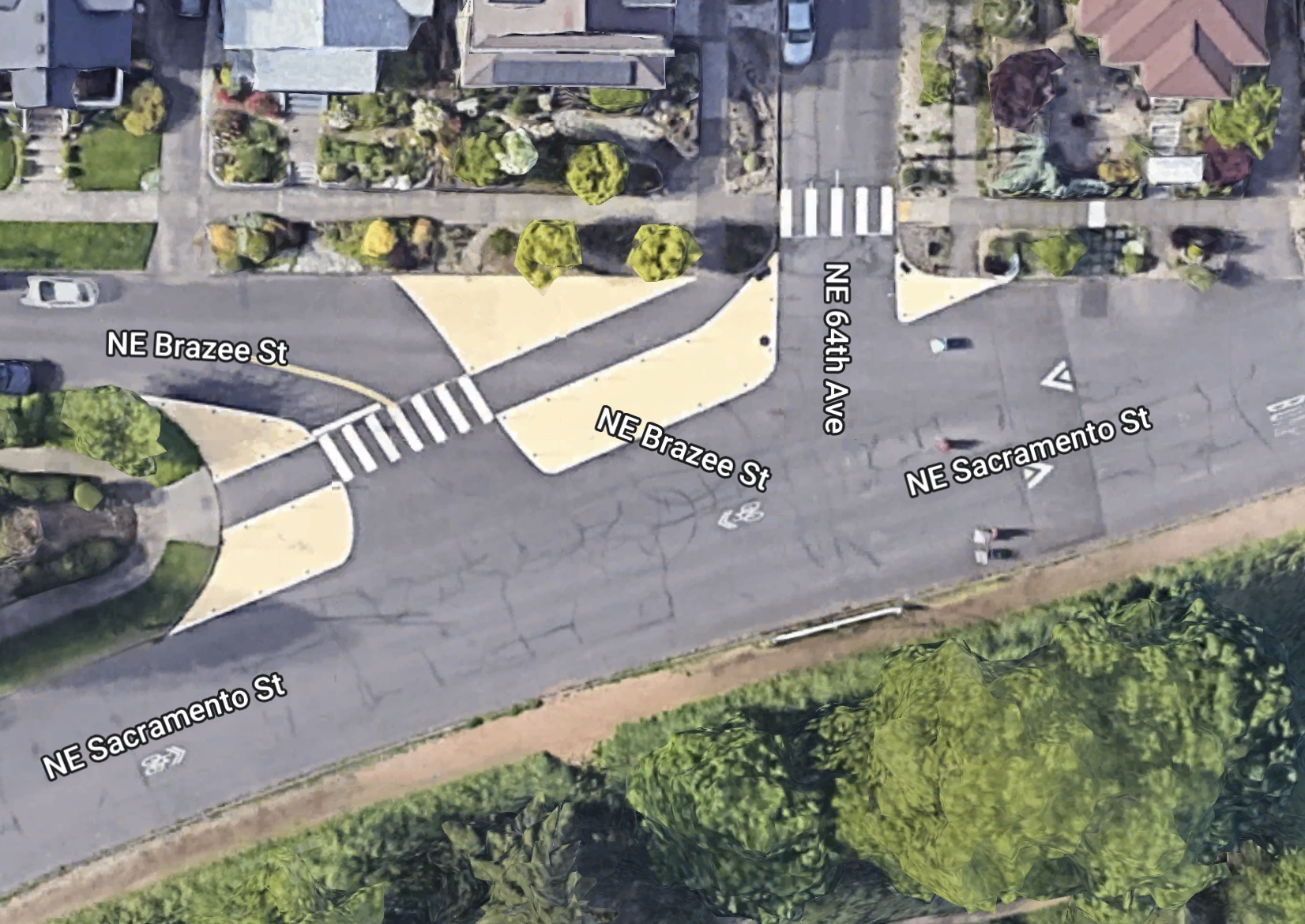