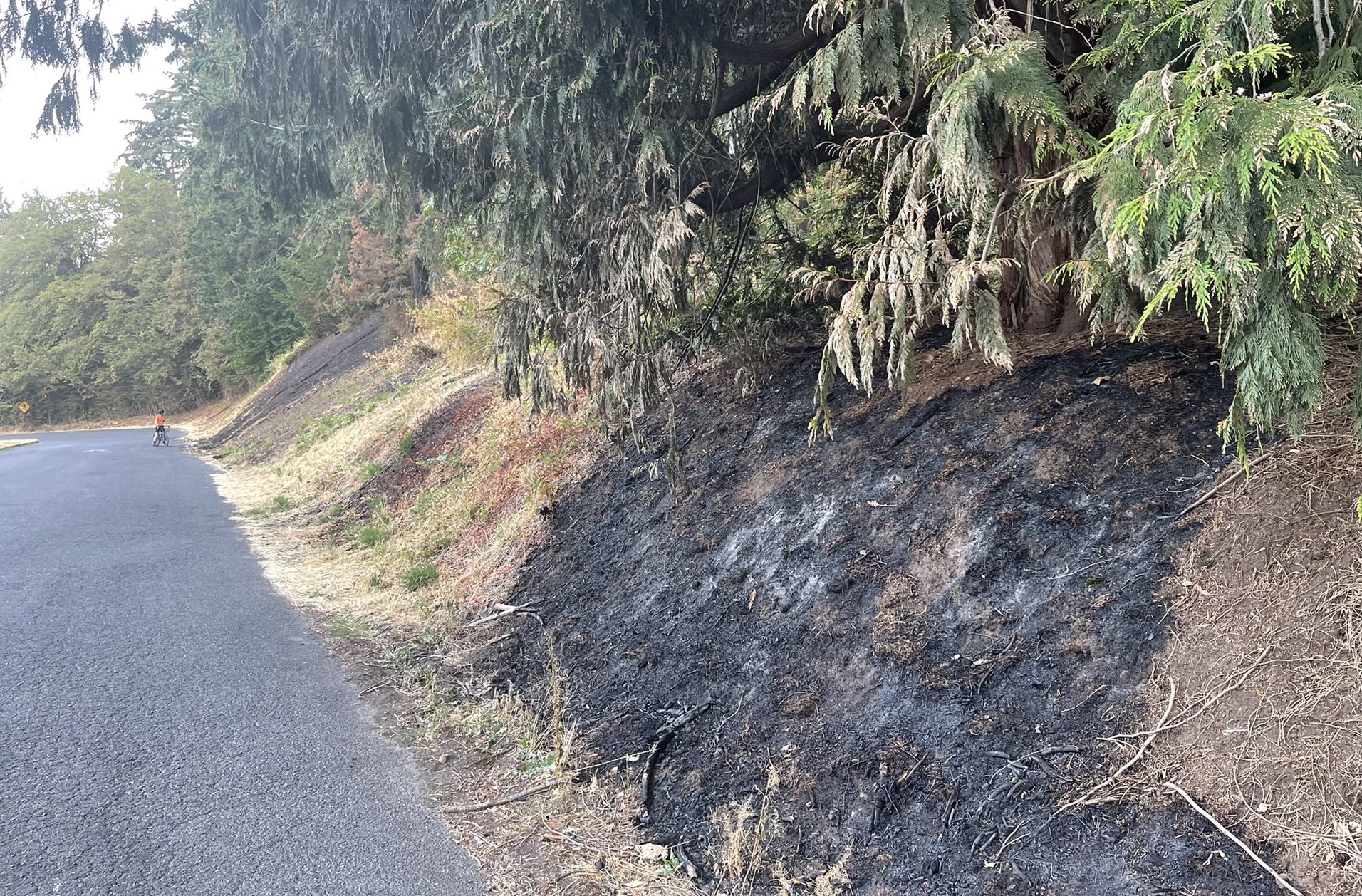 The reason? According to witness reports and the MTNA, 33 fires have been set by arsonists in the past week or so. They say the burn areas are along Southeast Yamhill above 60th and on line SE Lincoln Street near the off-leash dog park.

Mt. Tabor is a beloved, 196-acre park with trails, viewpoints, and picnic areas nestled alongside an extinct volcano. It’s paved roads are a favorite route for cyclists and this past June the park played host to the 70th annual Mt. Tabor Circuit Race.

We first heard about the fires from southeast Portlander Leslie Carlson. She posted a burned patch of hillside in the park on Twitter last week and wrote, “I will be crushed if that park catches fire. It’s been my physical/mental refuge throughout the pandemic.”

“I ride up there a lot of mornings so I was able to see the burns increase over a few days,” Carlson shared with me this morning. “It was alarming because it is so dry. I’m not a forester, but it looks to me like the whole park could go up if the fire got big enough.”

All this comes as fire officials and local leaders are girding for extremely high fire danger in the coming days due to a mix of dry, hot weather and strong wind gusts.

On Tabor, the MTNA isn’t waiting for help. They’re organizing volunteer fire patrols to report any suspicious activity and try to thwart new fires. According to their Facebook post, people who live next to the park have been walking all night with shovels to bury fires and have already reported several of them to 911. “The fire watch needs to be a community wide effort, given the burden. And this weekend winds will be higher than they have been so there is a real risk fires (if started) will spread quickly,” the message reads.

There’s an emergency neighborhood meeting tonight (Friday, September 9th) at 6:00 pm. A Parks rep and the city’s lead fire investigator are slated to attend. You can pre-register for the meeting via Zoom here.

If you spot a fire of any size while out biking, please report it to 911. And think good thoughts for our beloved parks!

Mt. Tabor Park is finally slated to get a rolling and walking path that would provide a much-needed entrance from Southeast Division street and the City of Portland needs to hear your support to make it happen.