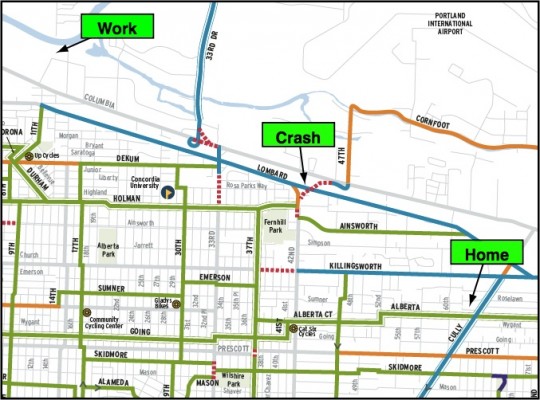 Martin Greenough’s commute on the City of Portland bike map.
(Note: The dotted red line (which denotes a high-caution area) near the crash site is for 42nd Avenue, which is on an overpass above Lombard.)

It’s a state highway, a freight route, and people drive about 50 mph on average! In many sections — especially around NE 42nd where 38-year-old Martin Greenough was killed on Saturday — Lombard is essentially an urban freeway. Biking is legally allowed, but practically prohibited by design.

“He was just getting to know the city. He might have just wanted to give it a shot and see.”
— Monica Maggio, Martin Greenough’s housemate

But you wouldn’t know that by looking at a city bike map.

In the past few days I’ve noticed a familiar thread of conversation around this tragic crash: Why was Martin even riding on that section of Lombard when everyone knows to avoid it like the plague? Some people, on a website that shall not be named, even go so far as blaming Martin for being in a place not meant for bike riders.

But what if Martin had no idea just how dangerous Lombard was until it was too late? 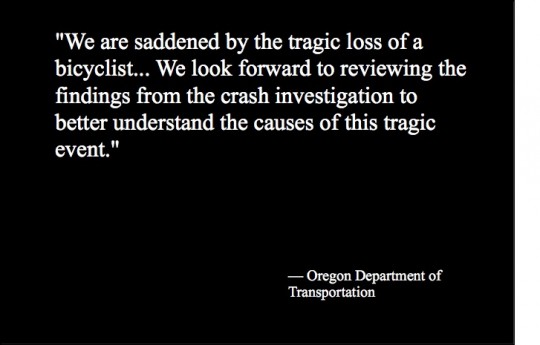 We’ve just received a response from the Oregon Department of Transportation in response to the crash Saturday night that killed Martin Greenough. 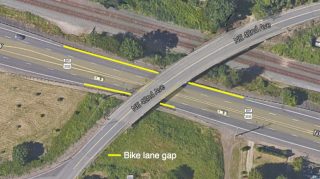 Martin Greenough is the name of the man who was killed while riding his bike on NE Lombard on Saturday night. He was 38 years old.

The man driving the car that struck Greenough, 26-year-old Kenneth Smith Jr., was in court yesterday to face multiple charges in the incident including Manslaughter in the Second Degree, Criminally Negligent Homicide, Reckless Driving, and Driving Under the Influence of Intoxicants (Marijuana). KATU-TV was at the Justice Center and provided some important new details about Smith’s family and the crash itself.

According to KATU, Smith’s wife spoke on his behalf at the hearing, saying that he’s “An awesome person and he’s a great father to all three of these kids.” She pleaded for leniency and said the crash was an accident and that Smith had no idea what he’d done. 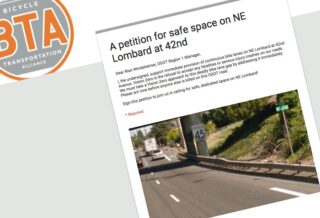 In the wake of a fatal crash that left one man dead, the Bicycle Transportation Alliance is calling on the Oregon Department of Transportation to install bike lanes on NE Lombard Avenue.
The BTA has just released a petition that they plan to deliver to ODOT Region 1 Manager Rian Windsheimer. Here’s the text of the petition:

I, the undersigned, support immediate provision of continuous bike lanes on NE Lombard at 42nd Avenue. Vision Zero is the refusal to accept any fatalities or serious injury crashes on our roads. We must take a Vision Zero approach to this deadly bike lane gap by addressing it immediately. Please act now before anyone else is killed on this ODOT road. 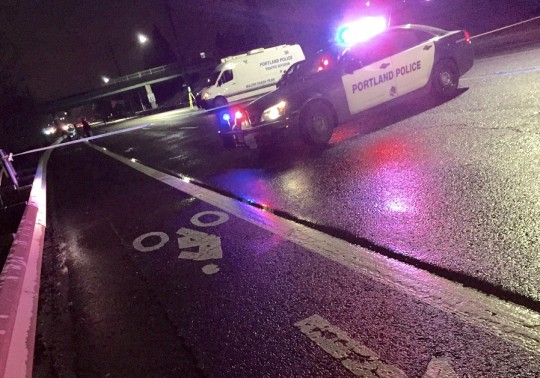 The crash scene. (Looking east on Lombard from the westbound lanes toward 42nd)
(Photos © J. Maus/BikePortland)

A man was killed while riding his bicycle on NE Lombard/Portland Highway tonight. According to the Portland Police the crash happened near NE 42nd Avenue. This is the same location we just wrote about on Friday as having a “scary pinch-point.”

The crash happened around 8:30 pm. Here’s the statement released by the PPB at 9:10 pm: