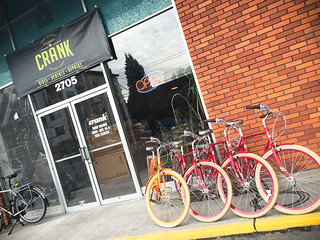 The only constant in Portland’s bike shop scene is change. On that note, I bring you updates on two southeast Portland shops that have opened up new doors in the past few weeks.

When Crank opened in 2010 I rolled over to look for it and, given what I knew about its general location near Southeast 28th Avenue, I just assumed it would be on Ankeny. But it wasn’t. It was one block over on Ash. That was a bummer because Ankeny is the very busy bike boulevard in that part of town. So imagine my delight when I found out the other day they’ve moved to… Ankeny! Yes, after many months of hard work, the folks at Crank are enjoying twice the space in a wonderfully remodeled retail store on Ankeny just before 28th.