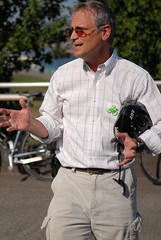 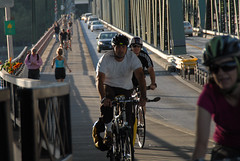 U.S. Congressman Earl Blumenauer (D-OR) is looking to introduce a new bill to Congress next week that would create a $2 billion grant program that would hasten investment in biking, walking, and other “active transportation options”.

Blumenauer’s office sent out a one pager and a PDF of the bill today, saying that the proposed legislation has already been vetted with national organizations and leaders, but that they are currently in negotiations to secure a Republican co-sponsor. The bill would look to increase mode share for biking and walking through “concentrated funding for active transportation networks”. “It is time for the federal government to support communities’ infrastructure investment,” the statement says.

The House Climate Bill that is set for a vote this Friday could help fill a transportation investment pot that states could put toward bike projects.

The American Clean Energy and Security Act (H.R. 2454) would raise money from polluters that go over their allowed emissions levels, an amount estimated to be $70 billion by 2010. Earlier this week, the House agreed that 10% of that money would go directly to states to use for a variety of transportation projects — including “bicycle facilities”.