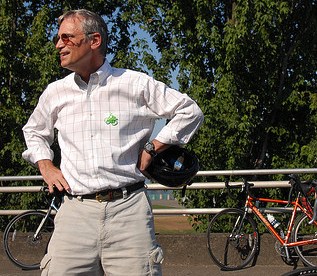 As the dust has settled a bit on the new, two-year transportation bill that was passed last week, it’s time to start understanding what it means for bicycling going forward. On Friday, I got a chance to talk about it with one of the most important national figures for bicycling, U.S. Congressman Earl Blumenauer.

Blumenauer is not only regarded as a major champion for bicycling in Congress, as a member of the House Ways and Means Committee, he also had a seat at the table of the conference committee that hashed out the final bill. At the outset of our conversation, I could hear from his voice that he was exasperated after what must have been a bruising negotiation process.