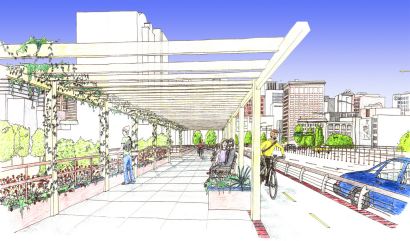 If Phil Goff had his way, his “Greenway Esplanade” concept would have transformed the Morrison Bridge into a biking and walking oasis. It didn’t quite turn out that way.
(Concept drawing by Phil Goff) 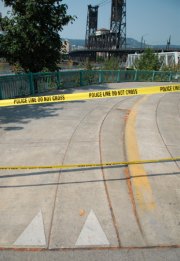 The Esplanade near the Steel
Bridge is closed due to a stabbing.
(Photo © J. Maus)

A fatal stabbing that happened late last night on the east end of the Steel Bridge has resulted in a closure of the popular bikeway. Reports from riders commuting to work this morning are that the ramp leading down to the Eastbank Esplanade is closed. The Esplanade is also closed just north of the floating section (and unfortunately there are no prior warning signs until you get right up to it).

Portland Police Bureau detectives are still investigating the scene. According to reports from the PPB Public Information Officer Mary Wheat, the initial call was about a fight and a stabbing. Two suspects have been detained whom police believe are involved with the incident. The deceased victim is a 39-year-old homeless man from the Portland area.

A man who ended up in the emergency room after a serious crash while riding on the Eastbank Esplanade last Friday (9/19) is looking for witnesses to help him piece together what happened.

Richard B. (he didn’t want to share his last name) says it was about 3:45 pm and he was riding south on the Esplanade just past the Fire Station near the Hawthorne Bridge. Here’s how he describes what happened next:

“It was one of my regular rides. I remember going by the fire station, then except for one brief blurry memory of an EMT lifting me into the ambulance, the next memory is being in the emergency room at OHSU after CT scan and evaluation.”