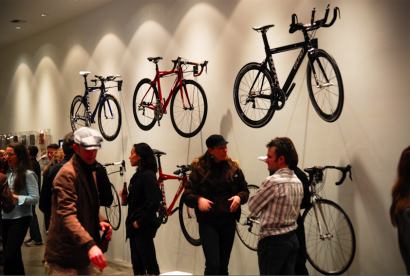 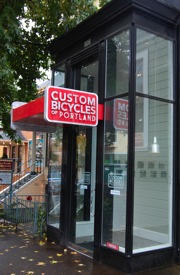 Custom Bicycles of Portland — the new Guru Bicycles concept store we profiled a few weeks ago — had their first official day of business on Saturday.

The store offers a unique, Dell Computer-like approach to bike retail. Only one brand is offered and customers can choose any color, style, and parts build-up they want. The shop also features a cutting edge fitting studio and the bikes are custom-made in Quebec and ready to ride in about four weeks.

Shop owner Adam Reiser told me he got a lot of foot traffic over the weekend (as one might expect on the busy shopping street of NW 23rd). 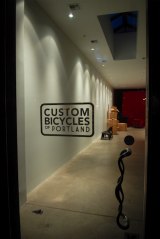 There’s a new bike shop in town, and it’s unlike any other shop in the United States.

Custom Bicycles of Portland will open in November on (fittingly) the boutique-lined NW 23rd Ave. The shop — which will also include a fitting studio — will be Quebec-based Guru Bikes first-ever “concept store” in the U.S. (meaning it will only sell Guru Bikes).

The new shop is the dream of Adam Reiser, a competitive triathlete, law school graduate, and the U.S. sales rep for Quebec-based Guru Bikes. During a recent demo tour through Portland, Reiser said he and his wife “fell in love” with the city and decided to move here in July. Reiser previously lived in Austin, Texas, where he and two partners built up a highly successful triathlon-focused shop (which he left to work for Guru).