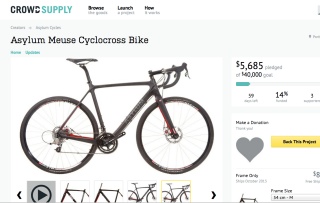 A Portland-based crowdfunding startup that launched this morning has strong cycling roots. Crowd Supply, a twist on the Kickstarter concept, was co-founded by noted web entrepreneur Lou Doctor and Scott Torborg. Doctor is also co-founder and Chairman of the Board at Velotech, which is the parent company of Western Bike Works, BikeTiresDirect.com and other e-commerce properties. Torborg is an MIT-trained hardware engineer and son of Jay Torborg, the co-founder and CEO of Velotech.

With these two and other “bike geeks” (as described by Crowd Supply Project Manager Patrick Croasdaile) on the Crowd Supply team, it should come as no surprise that two of the 10 initial projects launched by the company are bike-related. But before I get into those, it’s worth noting how Crowd Supply works.