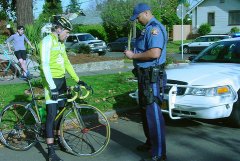 “…approaches are sometimes different, and misunderstandings likely because we are all human — regardless of whether we wear a stretchy bicycle jersey or an itchy police uniform.”
— From a public statement issued by the City Attorney’s office as part of a settlement reached in the Ainsworth Incident

Traffic citations given to two men who were ticketed for riding on NE Ainsworth Avenue back in November have been dismissed.

The case went in front of a Multnomah County traffic court judge at 1:30 pm this afternoon and, instead of arguing over who was at fault, all parties in the incident have signed onto an “Open Letter to the Community” (read it below, download here).

Reuben Vyn and Peter Welte were stopped by Officer James Pryce of the Portland Police on November 16th. Pryce said the men were impeding traffic, but Vyn and Welte, along with numerous witness accounts said otherwise. They claim Officer Pryce came within inches of them as he passed by on the narrow street and that he only turned around to cite them after one of the riders — in response to the close call — gestured and yelled at the officer.

The article below was written by Christopher Heaps. Heaps is a Sellwood resident who rides his bike daily to his job as a lawyer with Stoel Rives in downtown Portland.

You might remember Heaps as the lawyer who garnered a headline or two for successfully carrying out the “citizen-initiated citation” process. We wrote about Heaps earlier this month because he’s representing two men who feel they were wrongly cited in the Ainsworth Incident.

In the article below, Heaps shares his thoughts on why he thinks Portland should adopt a new safe passing ordinance.

“This will adequately address the inequity of this situation and show the community that bicyclists will not be punished for riding legally on the streets of Portland.”
— Lawyer Christopher Heaps

The lawyer for two men who were ticketed for riding their bikes on NE Ainsworth last month is imploring city leaders and the police chief to recognize the error made by the officer and have him dismiss the citations.

The request by Christopher Heaps, a lawyer with downtown Portland firm Stoel Rives who is representing the riders, comes in a nine-page letter sent yesterday to Mayor Potter and all four City Commissioners (download PDF, 1.0MB). According to the letter, Reuben Vyn and Peter Welte were “wrongfully issued traffic violation citations by Portland Police Bureau Officer Jimmy Pryce,” and Officer Pryce’s actions were “vindictive and violate Portland Police Bureau Policies”.