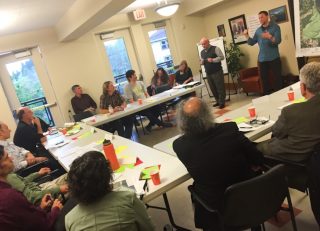 Back to work.
(Photos J. Maus/BikePortland)

On Wednesday of last week, the Portland Parks & Recreation Bureau hosted a Project Advisory Committee (PAC) meeting for the River View Natural Area. It was the first such meeting in 14 months for the group charged with developing a management plan for the 146-acre parcel.

Mountain bike advocates have been eager to re-engage with the process and learn more about why their activity was banned by Commissioners Amanda Fritz and Nick Fish last month. (Prior to the city’s purchase of River View, Portlanders had ridden bikes on its many trails for over two decades.) That decision came without warning and was made completely outside of the established public process.

The decision has made Portland a national embarrassment.

While he can’t keep Portland’s anti-mountain biking stances out of the headlines, at Wednesday’s meeting Parks Director Mike Abbaté did his best to make sure the topic of biking remained out of the public process around River View.

Here’s Abbaté attempt at doing that in his opening address to the committee and the assembled public: