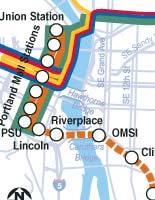 TriMet’s plans to build a new bridge over the Willamette River for their Portland to Milwaukie light rail line got a big boost in Salem on Saturday.

The Ways and Means Subcommittee on Capital Construction approved a funding bill (backed taxpayer and lottery bonds) that included $254 million to help build the bridge that is proposed to go from Riverplace to OMSI (see map at right).

Along with light rail, the “Caruthers Bridge” is expected to have a dedicated bicycle and pedestrian facility (I hope to have a comment on this from TriMet communications czar Mary Fetsch later today).

The project, which is also expected to receive $500 million in funds from the federal government, is expected to be completed by 2014.