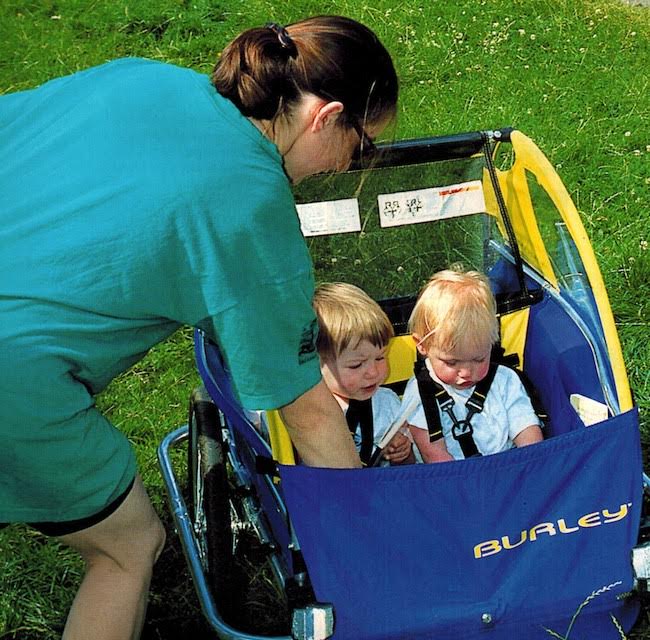 This article is by Josh Reid, a journalist from the U.K. who recently toured several Oregon bike companies. This is the first in a series that’s being published in conjunction with BikeBiz.com.

What would become Burley grew from a bike shop founded in 1969 in Fargo, North Dakota, by 17-year-old touring cyclist Alan Scholz.

I’ve been using Burley’s bicycle products since I was a tot. Photographic proof of this was emailed to me when, earlier this year, I visited the company’s HQ in Eugene, Oregon. There I am, seated in a 1997-vintage Burley Lite trailer, pulled by my 1965-vintage dad, editor-at-large of BikeBiz. A few years later I progressed to a Burley Piccolo trailercycle. Today, I often ride my dad’s 2002-vintage Burley Runabout steel-framed commuter bike – he long ago added an Xtracycle attachment, creating a cargobike.

What would become Burley grew from a bike shop founded in 1969 in Fargo, North Dakota, by 17-year-old touring cyclist Alan Scholz. Al’s Bike Shop took over the basement and garage of his parents’ house. This was just before the start of the American “bike boom” of the early 1970s which took almost everybody by surprise, and most especially the bicycle industry, which couldn’t keep up with demand. Thanks to health concerns, cycling had been building in popularity throughout the 1960s, and when baby-boomer ecological concerns merged with a fitness kick the American market for bicycles doubled within a couple of years. 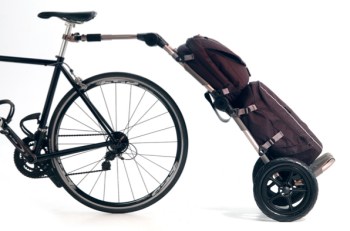 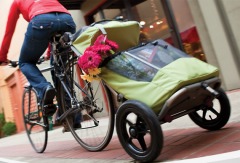 Burley’s Travoy brings home
the gold (and the groceries).

Burley Design, a Eugene-based company known for its bicycle trailers, has won big at the Eurobike trade show that kicked off today in Friedrichshafen, Germany today. Eurobike announced today that Burley has won a 2010 Eurobike Gold Award for their new Travoy cargo trailer.

The Travoy was awarded in the Accessories category and design credit was given to Aaron Beese, Joel Wilson, Gwen Spencer, and Chris Casler. The expert jury that doled out the award said the Travoy is “an impressive contribution to bicycle mobility” and that it’s, “A good idea that has also been well implemented.” 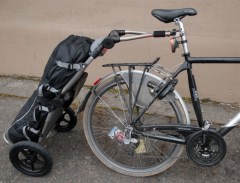 The Travoy from Burley.
(Photo © J. Maus – All other photos by Chris Sullivan)

From the first time you hold the top handle and move it around with one hand, you get a sense that it’s unlike anything else you’ve held — much less attached to the back of your bike. 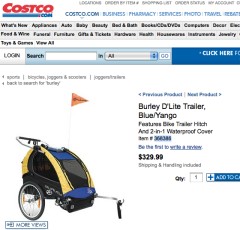 A screenshot of the Burley
D’Lite on sale at Costco.com.

When a friend of mine said they saw Burley trailers being sold at big-box retailer Costco last week, I was shocked. Based in Eugene, Oregon, Burley is known as a premium priced, quality brand in the bike industry. Selling to a big box retailer like Costco dilutes that reputation. This upsets dealers, who rely on the strenth of a brand’s reputation to sell products at full retail price.