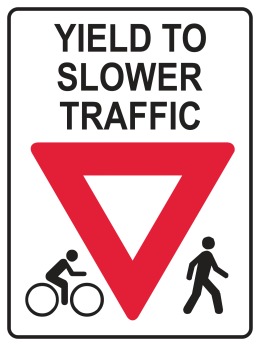 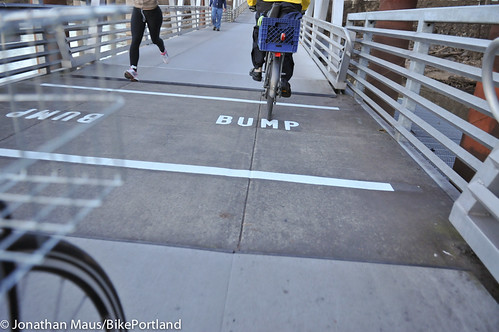 New markings to warn people of the harsh bump as you roll onto the floating ramps on the Eastbank Esplanade.
(Photos © J. Maus/BikePortland)

Portland Parks & Recreation has added new pavement markings on the Eastbank Esplanade floating ramps to warn people on bikes to prepare for a bump. The new markings are part of a larger campaign aimed at improving safety of path users. 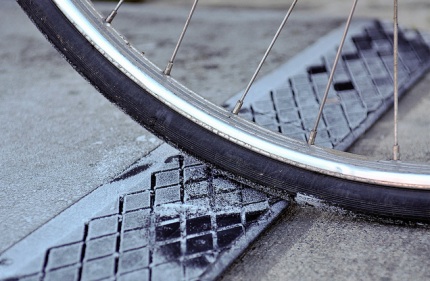 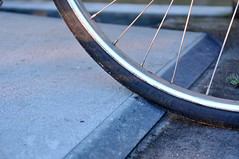 The existing “transition strips” on the
Esplanade ramps. See the new ones below…
(Photos © J. Maus)

The City of Portland Parks and Recreation Bureau has installed new bumps — a.k.a. “transition strips” — on one of the ramps (gangways) that leads to the floating portion of the Eastbank Esplanade. The installation is a pilot to determine if the new strips improve the experience of bicycling on the ramps.

Back in July, we detailed the problem with the existing bumps and ten days later I met at the site with Parks Bureau staffer Bob Downing to talk about the issue. The problem with the old bumps is that they are jarring, loud, and so severe that they catch many riders unaware and can lead to crashes. 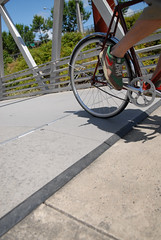 Routine repairs to the guardrails of the ramps that lead to the floating portion of the Eastbank Esplanade are set to begin this monday (11/29). Also, according to Portland Parks and Recreation, the work will include the installation of a new “ramp nose” with a shallower slope than the existing ones. This test installation of a shallower transition piece comes in response to a crash back in July and concerns that the existing bumps are too severe and are unneccessarily jarring to bike riders.

This past summer, Ron Richings was riding on the Esplanade when the bumps on the ramps jarred his bike and led to a crash that damaged his bike and required shoulder surgery to repair his rotator cuff (which severed in three places). After that crash (which, along with others I’d heard about, validated concerns I’d had about those bumps for a long time), I met with Bob Downing, the Central Services and Asset Systems Manager the Portland Parks and Recreation bureau. 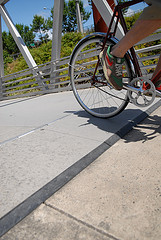 Parks will consider adding stripes
and signage to warn riders of
these bumps.
(Photos © J. Maus)

Last week I joined a Portland Parks & Recreation staffer for a visit to the Eastbank Esplanade. Our intention was to see what, if anything, could be done to smooth out a series of bumps that exist on ramps leading to the floating portion of the trail.

The meeting came after I published a story on July 9th about the bumps. That story sparked over 200 comments that expressed a range of opinions about them. Many people said they are no problem at all (once you get used to them), while others felt the bumps should be fixed. The man featured in that story, Ron Richings, crashed and sustained a serious shoulder injury after the bumps caused a bungee cord attached to his bike to become dislodged and get caught in his wheel. 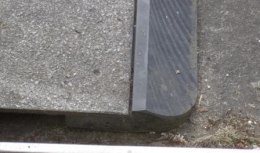 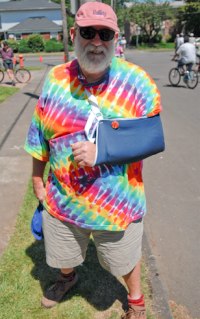 Ron Richings, one day after his crash.
(Photo © J. Maus)

Vancouver, BC resident Ron Richings has visited Portland for the past several years to take part in the annual Pedalpalooza events. On June 26th, he was leading a ride of his own — the Momentum Meander — when he learned a hard lesson about one of Portland’s most prominent bikeways.

Richings was riding north on the Eastbank Esplanade. As he descended down the ramp that leads to the floating portion of the path (under the Burnside Bridge), his bike hit one four bumps that act as transitional lips between ramp sections. The bump shook his bike, causing a bungee strap to dislodge, become entangled into his wheel and crumpling his front fork. He flew over the handlebars and landing on the concrete walkway. Richings ended up in the hospital and still has pain in his shoulder.