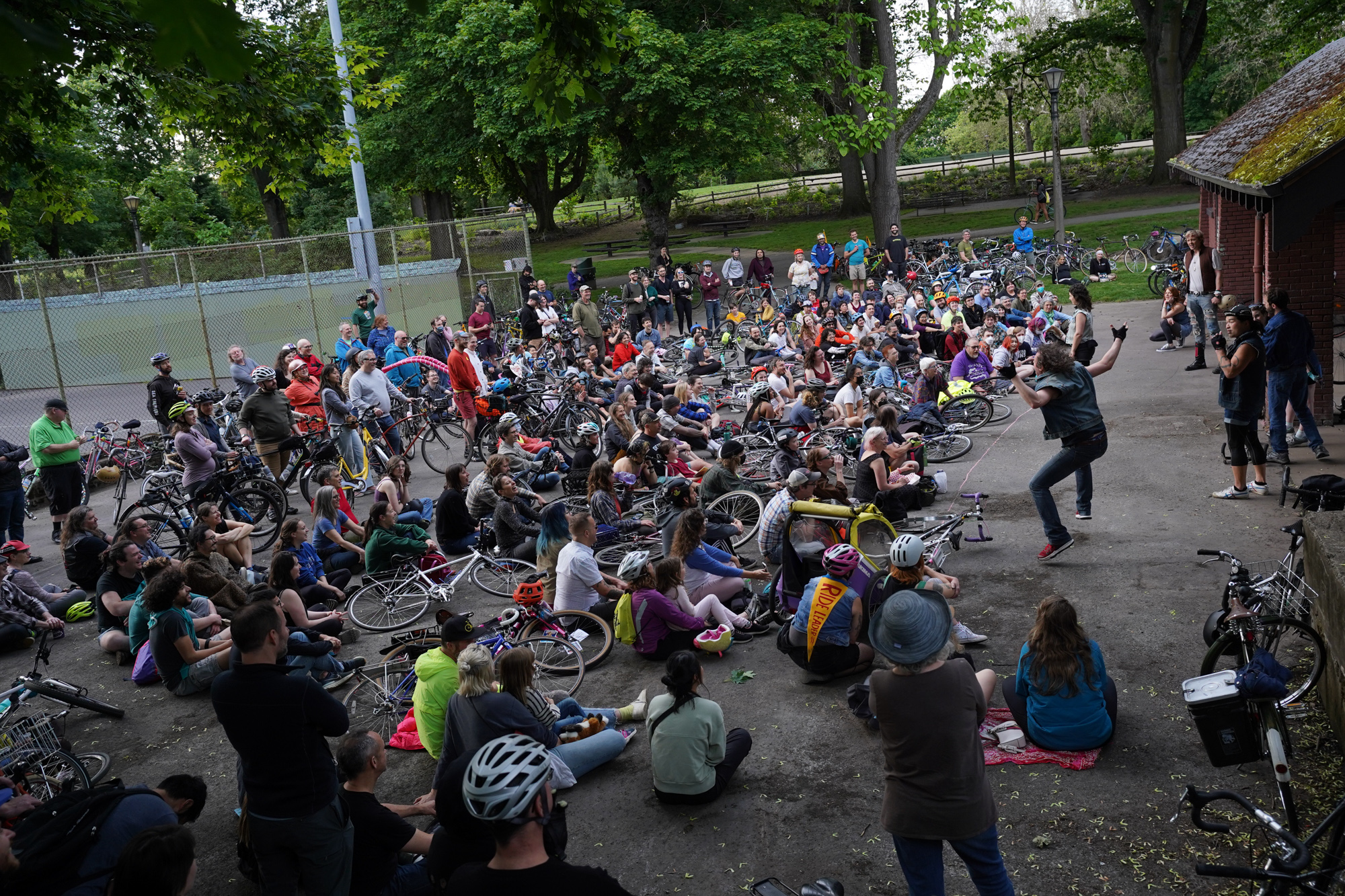 Of the many creations inspired by Pedalpalooza over the years, perhaps none is more special than Bike Play.

The event/ride is an original play written for Pedalpalooza that includes professional acting, multiple scenes, and original song and dance numbers. The stages are parks, parking lots, and other public spaces and the audience rides alongside the actors to each one. There are no tickets and everyone is welcome.

This is the 13th year of Bike Play, and Thursday night a huge crowd enjoyed every minute of it.

Created by The Working Theater Collective under the direction of Ashley Hollingshead, this year’s play was titled Beyond Velodrome: PDX Drift. The entire cast helped write the play and rehearsed four days a week since March. After seeing last night’s show, their hard work has clearly paid off.

The setting was a post-apocalyptic Portland in the “Pacific Northwasteland” that had suffered a mass inflation event.

The first of five scenes was staged at Capitalism Fountain outside the ruins of Lloyd Center Mall on Northeast Multnomah and 9th. The sculpture was an apt backdrop for the drama that would unfold.

Announcer Scott Weidlich (who also played Tom Cruiser) set the scene by describing that the Portland as we know it had died because people became too enamored with stuff. “The more they had, the more they worshiped at the beacon of commerce,” Weidlich pronounced to the huge crowd.

“Into the silence came bicycle gangs,” he continued. “They were ruthless, and they survived.”

The Broken Spokes were the toughest gang in town. When a Stranger (played by Hans Ellis) showed up searching for community and a long lost Brooks saddle that was owned by his dead father, he finds more than he bargained for.

Alongside his bike named “Hermes,” the Stranger saves eventual love interest Schwinnona Rider (played by Lindsay Liden) from a rival gang and decides he wants to become a Broken Spoke himself. But he must first survive the “Rite of Rituals” and navigate a series of trials as well as relationships with friends and enemies.

One of the trials is a bike race that takes place in a parking lot off Northeast Tillamook and Martin Luther King Jr. Blvd. The way they depicted the action was brilliant. The actors stood in place (without bikes, see photo below) as if they were astride their bikes in a peloton. The announcer gave a play-by-play as the drama ensued. At points of high tension between the Stranger and his arch rival, Racer X (played by Brett Hamann), the announcer and actors went into slow-motion mode and hilarity ensued.

During a scene played at Harriet Tubman Middle School, there was a delightfully choreographed dance to The Weeknd’s hit song Blinding Lights. One of my favorite moments was a campy yet very sweet duet sung by the Stranger and Schwinnona Rider.

And if you love puns, you are in for a treat. The script was full of Portland and bike-related jokes. Cycle Angelo (Hayley Hessler) described one of the characters as being, “Like a voracious racoon rummaging through a Laughing Planet dumpster.” And when The Stranger showed up at the gang’s secret hideout and said, “I come in peace,” a suspicious Dwayne “U-Lock” Johnson (Yohhei Sato) replied, “Bikely story.”

For the final scene we returned to Lloyd Center. As the sun set over the West Hills, the crowd settled on the roof of a parking lot to watch the resolution.

Did the Broken Spokes survive an internal rift with Skid Vicious (played by Kris Mahoney-Watson)? What secret was Racer X hiding? Was the gang being sabotaged from within by Cycle Angelo (Hayley Hessler), the mechanic Fixie Mattel (Emilie Landmann) or Dwayne “U-Lock” Johnson (Yohhei Sato)?

You’ll have to see it yourself to find out.

I cannot recommend this enough! The script is brilliant and the performances were heartfelt and on-point. Bike Play 13 runs for three more nights, June 17th, 18th and 19th. Get the details on our calendar. For updates, follow Bike Play on Instagram.

If you appreciate the amazing work of these artists, consider supporting them via Venmo @bike-play. 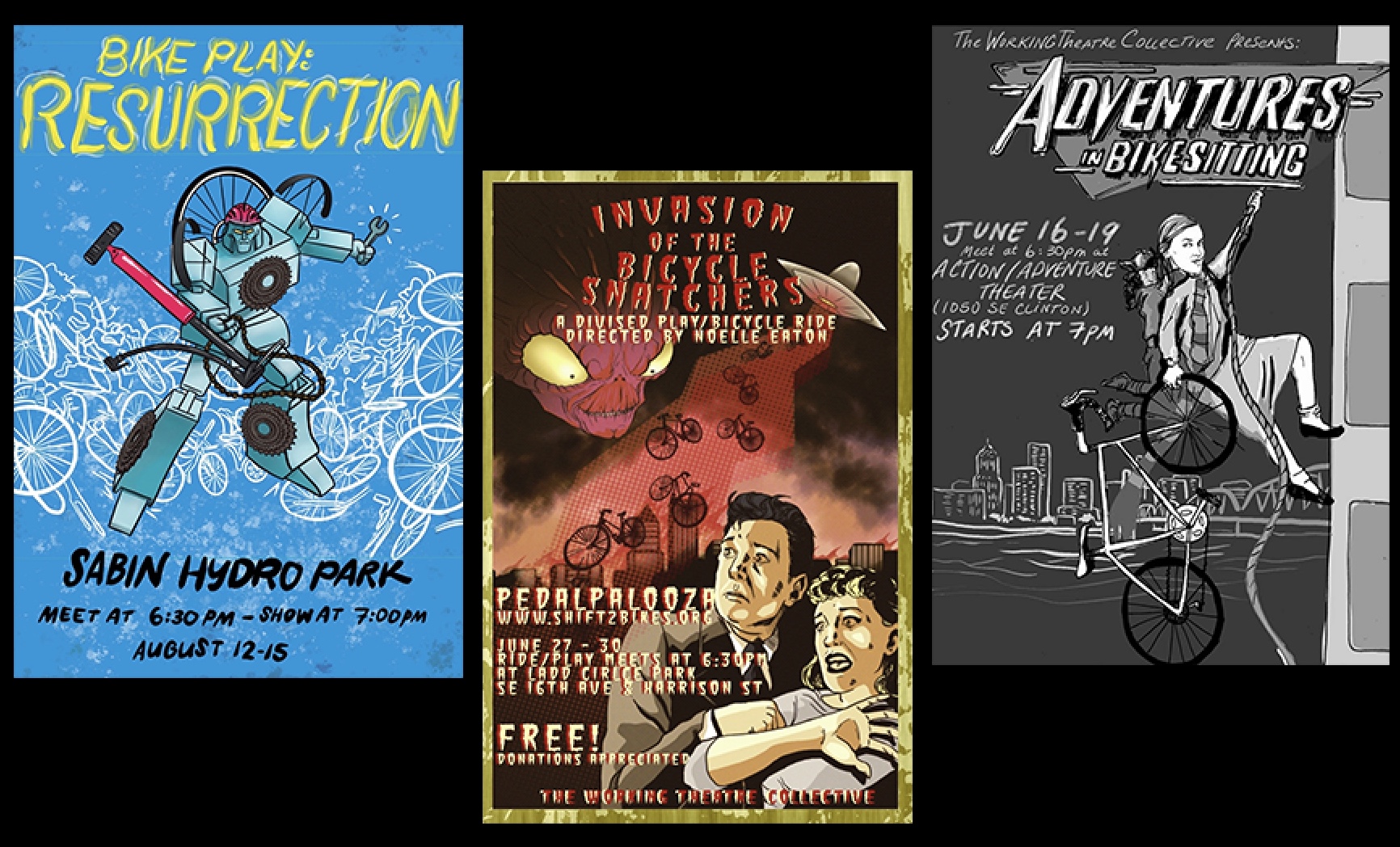 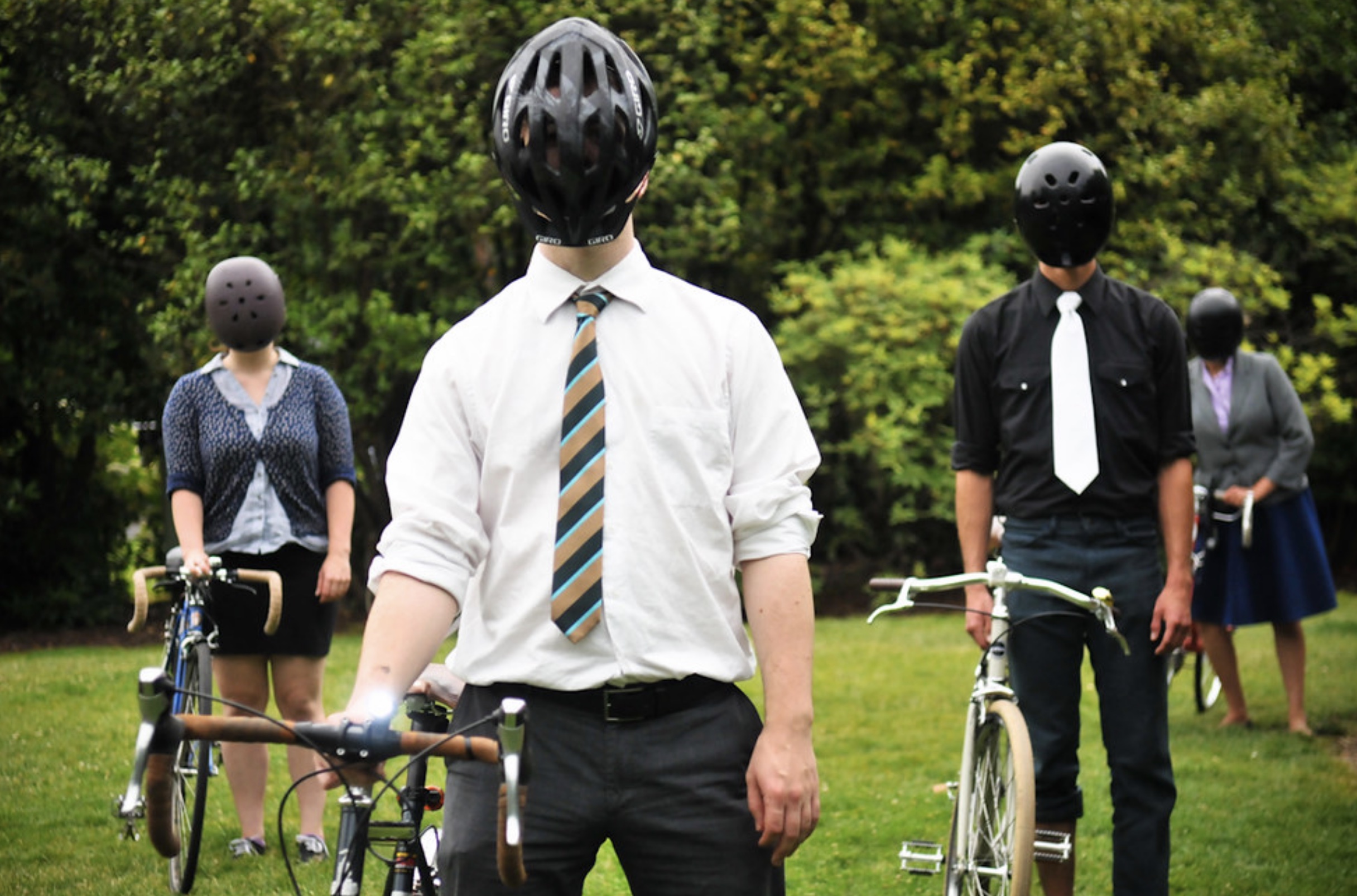 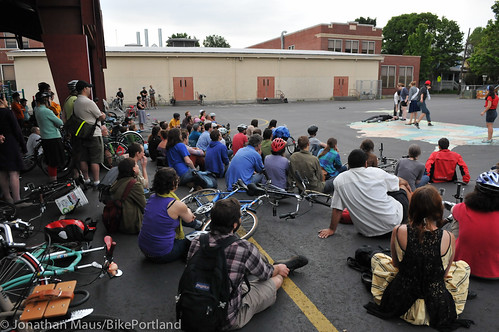 The crowd takes in a scene from The Invasion of the Bicycle Snatchers at Buckman Elementary School last night.
(Photo © J. Maus/BikePortland