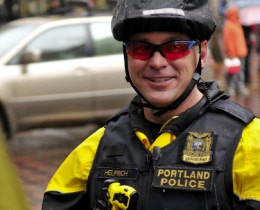 The face of a front-line officer at yesterday’s protest.
(Photo © J. Maus)

Our story about cops on bikes at the Occupy Portland protests yesterday has sparked a dialogue (that’s happening citywide, not just on BikePortland) about the size and style of force the City of Portland is bringing to these events.

In a comment on our story yesterday, former PPB bicycle liaison officer and noted community advocate Robert Pickett explained the reason for riot gear. “Jonathon [sic],” wrote Pickett, “the officers in riot gear are not there to respond to people like you, or most of the protesters at any demonstration. That is one of the reasons why this critique comes so often, I believe — most of the protestors are not there to attack or injure officers, so it is hard for them to understand the need for heavily armored officers.”

Pickett went on to share that police are prepping for the “small minority who mingle among the peaceful protestors.” 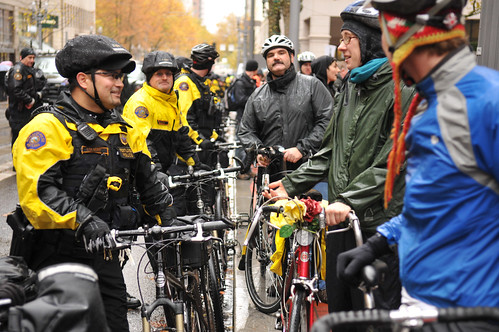 Police officers and supporters of the Occupy protests chat, while police in riot gear arrested protestors inside a bank this afternoon in downtown Portland.
(Photos © J. Maus) 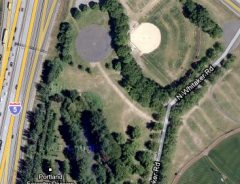 Detail of map showing one of the
paths through Delta Park near I-5.

The City of Portland plans to start up a citizen bike patrol to work the paths around Delta Park and Interstate 5 in North Portland.

According to an announcement for the upcoming training event that happens Tuesday (5/11), members of the new patrol would, “gather periodically and ride this area and report any illegal or suspicious activity to the Portland Police Bureau.”

City Crime Prevention Coordinator Mark Wells is behind the new bike patrol. The program will be based on the City’s existing foot patrol program, the most successful of which is the Mt. Tabor Park Foot Patrol that has 27 active volunteer members who patrols the park, educates parks users, picks up litter and reports illegal activity.

The Office of Neighborhood Involvement will host the new group. To my knowledge, this will be Portland’s first ever bike patrol.