“Of course all of these areas are worthy, and our job is to prioritize the funding here. But this is not necessarily that way I think we should be budgeting.”
— Marcilynn Burke, OTC member

After months of back and forth between the Oregon Department of Transportation (ODOT) and various interest groups, the Oregon Transportation Commission (OTC) has made a decision about how the state should distribute $412 million in flexible funding from President Joe Biden’s Infrastructure Investment and Jobs Act (IIJA).

This flexible funding is just part of the $1.2 billion total IIJA funds Oregon will be allotted over the next five years. More than half of that total is “dedicated funding” to be spent on programs like bridge repair and electric car charging infrastructure. Since there was this large pot of money up for negotiation, however, activist groups and some politicians have been vocal about asking OTC to take a strong stance toward climate action via investment in active transportation systems instead of car-centric infrastructure like freeways, interchanges, and so on.

The OTC had four potential spending scenarios for this $412 million, and each one laid out a different proportion of funds categories such as highway enhancement, public/active transportation, planning, infrastructure repair, and so on.

Led by House Rep. Khanh Pham (D-Portland) and groups like No More Freeways, Bike Loud and The Street Trust, climate activists rallied behind a different spending scenario that rejected highway enhancement and infrastructure repair proposals altogether, opting only to focus on public and active transportation and local transportation funding.

This alternative proposed scenario was ultimately rejected as commissioners opted to allocate the funding more evenly among projects to fix existing infrastructure and improve active transportation, with less attention – but still some – on “enhancing” highways in a plan several commissioners indicated they were interested in pursuing at the last OTC meeting on March 10.

As of today, the final funding allocations have been set. Here’s the full breakdown of where the $412 million will go (taken from ODOT statement):

During the OTC meeting presentation, ODOT staff tended to spotlight the money going to active and public transportation above the other areas. Staff especially appeared to downplay the money going to the highway category, which was the least popular funding category among activists. Travis Brouwer, ODOT’s Assistant Director of Revenue, Finance and Compliance repeatedly pointed out that, at $50 million, this category receives the smallest pot of money among the major areas of focus.

Brouwer said the $50 million that will be allocated to freeway enhancement from the flexible funding will go to the US 97 Bend North Corridor Project and the I-5 Aurora-Donald Interchange Project.

While it’s true that the “enhance highway” category ultimately received the least amount of funding, it should be pointed out that even as ODOT talks up the attention it’s giving to sustainable and equitable transportation projects, it still self-admittedly falls very short when it comes to making an impact on greenhouse gas mitigation.

Brouwer showed a chart of how the IIJA funding will help ODOT meet various goals, applying grades to how the transportation agency was doing before the new influx of money compared to how it expects to fare after. Right now, ODOT grades itself at a “D-” for greenhouse gas mitigation efforts, which staff expects to see elevated to a regular “D” after this funding is applied.

“Today’s OTC decision on how to spend the $412 million in flexible funding from the federal IIJA package was a lost opportunity. In this moment when communities are suffering from high gas prices, climate change, and lack access to transportation, we need to be doubling down on safety, orphan highways, public transit, bike-ped, and local transportation projects, not more of the same business as usual,” Pham said in the statement.

The press release acknowledges the money the OTC did allocate toward public and active transportation, but said it still “does not go far enough to fill deep community needs.”

Despite this mostly cold reaction, there is one new item on the budget that is of interest to active transportation activists: the proposed Innovative Mobility Pilot Program (IMPP), that will provide grants to community organizations and government agencies across the state to invest in “innovative public and active transportation projects for the goal of enhancing sustainability and equity”.

At the beginning of today’s OTC meeting, the IMPP only had $5 million in funding. However Alando Simpson, the OTC commissioner who initially proposed it, was able to negotiate an extra $5 million for the program, which could be expanded to $20 million in the future. This extra $5 million will come from the money designated for accessibility improvements for people with disabilities, which will now be granted $95 million instead of $100 in flexible funding. ODOT staff said this funding will need to be made up for in the future, but Simpson said it will be money well-spent.

“I think there’s a great opportunity right now for [ODOT] to step up and have a more intimate relationship with community organizations and individuals at those organizations,” Simpson said at the meeting. “The people are going to know what the highest needs are going to be for themselves as well as future generations as it pertains to alternative mobility outside of the highway system.”

Though there are some exciting programs like this down the pike, commissioners mentioned how dispersing money like this can feel somewhat futile when there are so many problems to solve.

According to Commissioner Marcilynn Burke, this budgeting process has the commission spreading itself out too thin, and she’s worried this will dampen the positive impacts this money will be able to have.

“Of course all of these areas are worthy, and our job is to prioritize the funding here. But this is not necessarily that way I think we should be budgeting,” Burke said. “I’m concerned we’re trending towards peanut butter.”

Anyone looking to ODOT leadership to reduce ICE dependency is looking in the wrong place. ODOT is owned fully by the freight industry and will never takes steps to reduce ICE utilization until we have regime change and jettison neolibs and their cousins in the GOP.

On the other hand considering the state America is in now, and what’s coming down the line, this allocation looks pretty good. Take the money and run. It won’t be there if/when republicans take charge next year, or The Big One hits first.

Right now, ODOT grades itself at a “D-” for greenhouse gas mitigation efforts, which staff expects to see elevated to a regular “D” after this funding is applied.

I guess it’s good that they recognize that?… Maybe? It would be better if they did something more about it.

Wow, they’re looking at a Diverging Diamond for the Aurora interchange. I think this would be the first one in the state? I will be very interesting to see how they accommodate bikes on this interchange, because it may be a fore bearer of future unfriendly freeway/surface road interchanges. 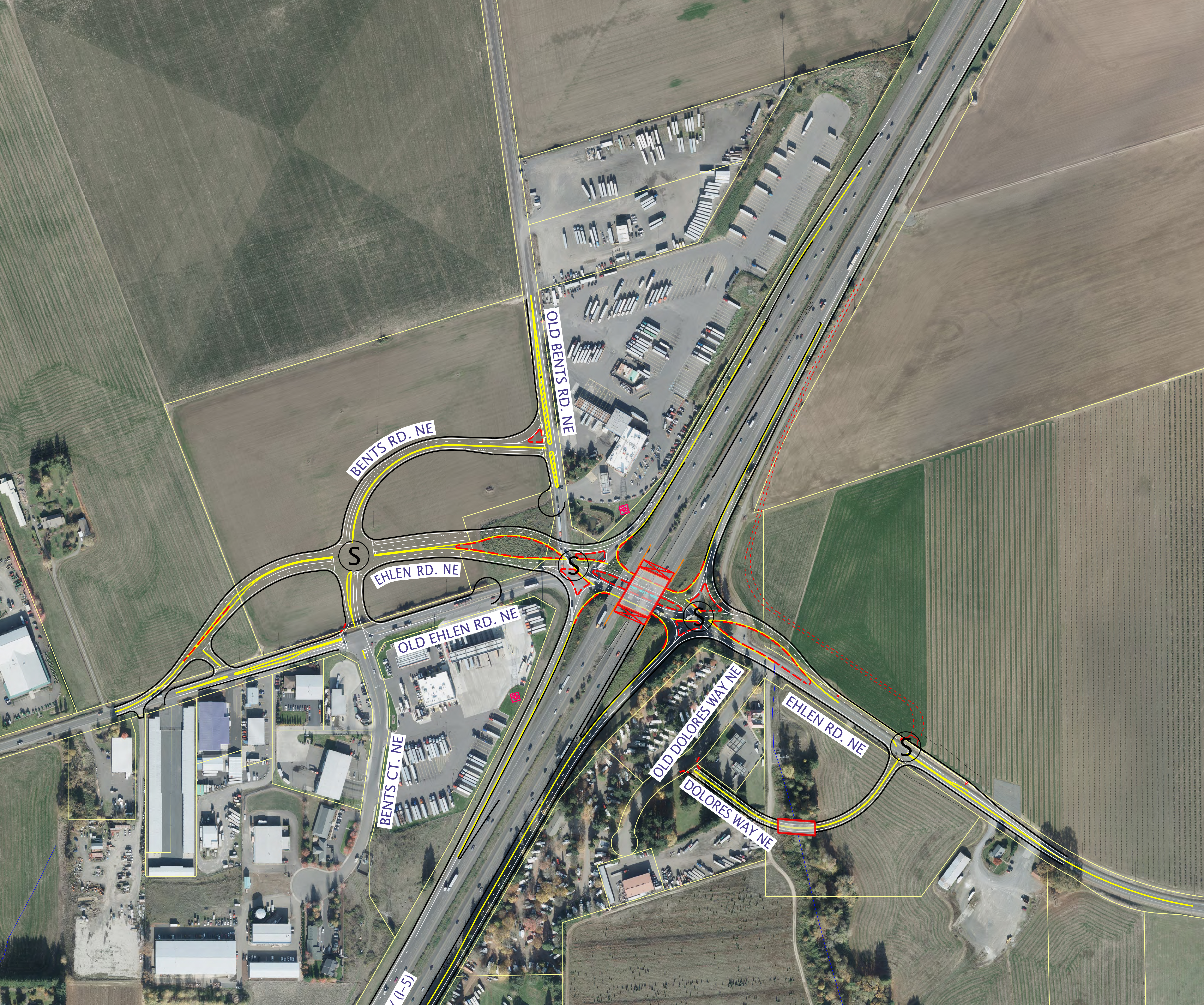 Serenity
Reply to  Chris I

I don’t see them accommodating bikes on that interchange.

Mike Jaffe
Reply to  Chris I

There is a diverging diamond interchange across I-5, recently built in the Phoenix area, exit 24 (south of Medford). I think it was the first DDI in Oregon. Use Google Maps (satellite view) to see how bikes can navigate the interchange.