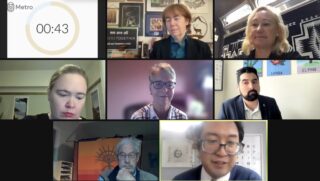 Duncan Hwang is the newest member of the Metro Council, filling the District 6 seat that has been vacant since Bob Stacey resigned mid-term in October due to health issues. The council voted 5-1 today to appoint Hwang as interim councilor, with Councilor Gerritt Rosenthal – who supported Terri Preeg Riggsby – as the dissenting vote.

Hwang will serve as interim councilor until January 2023. An election will be held in May 2022 for a candidate to fill out the rest of Councilor Stacey’s term in 2023 and 2024 — a race Hwang has already made clear he intends on running. The May election will potentially lead to another election in November if no candidate receives more than 50% of the vote.

Stacey was a strong advocate for sustainable transportation, land-use and urban planning, with extensive experience in these fields. Because of Stacey’s expertise in this area, it was particularly important that his replacement be adept in these fields as well.

Much of the discussion in the meeting focused on the homelessness crisis and the need for affordable housing in the region. Applicants also discussed how city planning — including transportation infrastructure — should prioritize the needs of marginalized and vulnerable communities.

Councilors asked each applicant about their thoughts on the importance of diverse representation on the Metro Council, asking them to assess the council’s current work in diversity and equity. Each applicant was asked to speak about how their personal and professional backgrounds will elicit success in the range of jurisdictions that Metro Council works in, as well as their plans to communicate with District 6 community members if they were appointed to the council.

Six people spoke to ask for consideration for nomination. In addition to Hwang, they were: Jeff Merrick, Terri Preeg Riggsby, Thao Tu, Byron Christopher Vaughn and Adam Weiner. Out of this pool, Metro councilors nominated Hwang and Riggsby to be considered for a vote.

Preeg Riggsby, the only other challenger who was up for a vote against Hwang, was described as a “conservation leader” in a story from the Portland Mercury last month. During her statement, Preeg Riggsby gave a nod to bicycling, pointing out that low-income and communities of color who live in neighborhoods on the outskirts of Portland don’t have as much access to bike infrastructure as people who live closer to the city center. She also spoke about the importance of disability advocacy and equitable mobility in infrastructure projects.

During Hwang’s statement, he emphasized the value of his experience growing up in an immigrant family. Hwang is currently the interim co-executive director of the Asian Pacific American Network of Oregon (APANO), advocating for investment in equitable transportation infrastructure and safe streets in the Jade District of east Portland.

“I see housing affordability and addressing homelessness as the region’s top priority,” Hwang said at the meeting. “These are regional issues that require regional solutions and funding, and that’s why it’s important for Metro to be involved in this work.”

Hwang also discussed the importance of prioritizing the needs of marginalized communities in infrastructure development and transportation issues.

“A core value of mine is also addressing involuntary displacement in our community. We can’t be talking about investments in transportation, parks and green space without considering the legacies of these projects in the past,” he said.

Hwang has shown strong support for equitable transportation policy as well as addressing the rise in anti-Asian hate and bias incidents. These are both areas of interest he says he will bring attention to as a member of Metro Council.

During the public comment section of the meeting, Hwang received a majority of the support from elected officials and community members calling in to voice their thoughts. These people included Portland City Commissioner Jo Ann Hardesty, Oregon State Rep. (and fellow APANO alum) Khanh Pham and Native American Youth and Family Center Government Affairs Manager William Miller, among others. Hwang also had his predecessor’s endorsement, though Stacey didn’t speak at the meeting today.

During Hardesty’s endorsement, she pointed out the value of having political representation from East Portland, which she says has been lacking in the past.

That’ll be put into use right away as Hwang’s appointment means that he’ll be seated at this Thursday’s council meeting.

“It is my great honor to accept this appointment and immediately begin work serving my constituents at our regional government,” Hwang said in a statement after the vote. “Our region urgently needs solutions to address our overlapping crisis of homelessness, affordable housing and climate action, and I’m eager to work with Metro to prioritize the immediate action our region deserves.”

Duncan sounds like a great appointment! And so good to have East Portland represented.

If only Portland City Council were elected by district…

If only Portland City Council were elected by district…

Keep writing as much to the Charter Commission (and I’d also encourage positively mentioning multi-member districts and STAR voting)!

Oh boy. Another do nothing far left activist. He will just support more of the same failed polices that we currently have.

Rudy. Please explain. What makes him “Far left”? And what is a “Failed” policy that we currently have which came from the “Far left”?

I didn’t know that we had any far left policy makers in the Portland area or anywhere in Oregon.

I didn’t know that we had any far left policy makers in the Portland area or anywhere in Oregon.

An analogy I liken to Americans’ common misconception that center-right liberals/Democrats are on the left at all, let alone “far left”, is calling Arkansas the west if you’re looking at the map so closely your eye is basically touching Georgia.

I find politicalcompass.org valuable for perspective.