I have been wanting to learn more about stormwater management, keeping an eye on the progress of one of the four stormwater detention and treatment basins that are being built for the SW Capitol Highway project seemed like a fun way to do it. So let’s go!

The 42nd/Woods Creek Stormwater Facility is off of SW Alice St, at the end of 42nd Ave. It is the lower left basin in the illustration below.

The water will flow from this basin into Woods Creek, downhill from the facility (below, right photo).

I took the photos above on September 26. When I returned three days later, there was a crane on site installing the pre-formed concrete walls of the basin.

Streets are dirty, and the stormwater that runs off them carries pollutants generated by cars. The purpose of the basin is to filter that water, and to manage its flow.

A foreman explained to me that the basin is divided into four chambers, the stormwater runoff from Capitol Highway will enter the first chamber, the sediment forebay, where most of the sediment will fall to the bottom. The progressively cleaner water spills over the weirs into the next lower chamber. The sediment forebay is serviced to clean out accumulating gunk.

The cleaned water exits at bottom through the pipe in the lowest chamber. It is mounted on a catch basin which collects any debris which accumulates near the facility site.

According to the bi-weekly Capitol Highway project update, “The 42nd/Woods Creek stormwater facility and surrounding land will get “buttoned up” over the next two to three weeks, with installation of soil and drainage features, hyrdroseeding of bare dirt, restoration of adjacent disturbed property, and opening of the replaced Alice Trail bridge.”

I don’t know how the top of this basin will be finished. Does it get a cover of some sort? Will it look like a pond, or get plantings? We will know in a couple of weeks.

Bertha and SW and Beaverton-Hillsdale Hwy

A couple of commenters alerted me to further work that happened at this location over the weekend. Since BikePortland last reported on it, PBOT has installed curbs and candles on the buffer between right-turning cars and the eastbound bike lane. The project still awaits its final feature, a bicycle sensor which will trigger a signal. Across the highway, PBOT is installing concrete curbs to protect the westbound bike lane.

And since I was in the area … the platform of the Red Electric Trail bridge waiting to be set atop the pillars in the gulch. 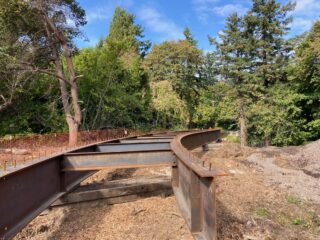 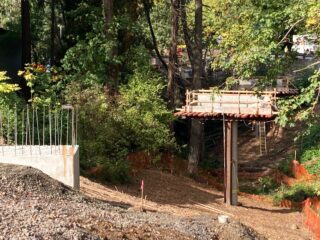 Thank you, Lisa, for the great coverage. One tip I want to pass on, as someone who commutes from the Village to the PCC Sylvania campus via SW Capitol Hwy, is that when the construction crews are not present on that stretch, such as after-hours or Sunday, you can ride in the blocked-off section car-free. Of course, you have to be alert not to smack into signs or other barriers.

Re: “I don’t know how the top of this basin will be finished. Does it get a cover of some sort? Will it look like a pond, or get plantings?”

Usually in Portland there would be plants added, like grasses and small bushes, see examples here: https://www.portlandoregon.gov/bes/45386

Watching cars drive through the bus lane at 30mph instead of making the turn will be the cause of the first accident.,

What will the signal do, and which users (bike/motorist) will it be directed toward? Based on the photo, the EB cyclist must first be checking oncoming traffic over his shoulder and then immediately be ready for a left turning car heading from Bertha to BH Hwy. Perhaps this is figured out by the PBOT engineers, but the former configuration at least provided a couple seconds between attending to the right turning traffic and worrying about the cars coming in from Bertha.

I’m also wondering that. In the initial article, I was dubious about this change for the same reason you mention and other reasons many others mentioned. I assume the signal will tell eastbound drivers turning right onto Bertha from BHH to yield to eastbound bikes. But it should also tell drivers turning left from Bertha onto BHH to yield to APPROACHING eastbound bikes. PBOT has placed a small orange sign aimed at those turning drivers saying “Yield to people crossing” or something similar. In a way, that muddies things–reinforcing to drivers that the eastbound bike route is like a standard crosswalk, where the driver has to yield to people already in the crosswalk, but not to those approaching it.

So it seems like the safety of this design is coming down entirely to exactly what the signal does. That’s a bit scary to me (as is still having no signal at all).

Hi Keith and qqq, this project is one of the Southwest in Motion Crossing Enhancement projects, which you can find online. Most of them are completed.

That list of 14 projects did not come with posted designs, just paragraph descriptions. So I don’t know what the configuration of the “detection and advanced activated warning signs” will be.

The Vermont/Cap Hwy crossing (the only one left to do) was a subject of discussion at the most recent SWNI transportation committee meeting I attended.

I figure it won’t be long (I hope) before it’s all done and then we’ll see how it all works. I’d love to see it all work out well. It could also be that even if it isn’t perfect, it will still be an improvement.

I really appreciate the original article and this update. The photo above is perfect for showing things at a glance.

Thanks, qqq. I stood on the bridge and watched the cars making right turns for a while, most had to slow down quite a bit. However, the high-end cars, like the Mercedes I saw, have enough computer gizmo going on w the differential that they can take the turn surprisingly quickly w/o losing traction.

I tend to like rationalizing intersections, but I’ve noticed that the design is often initially met w skepticism/hostility. The in-your-face aspect is their feature, not a bug. But I agree, the warning sign will be important. Let’s see.