I’ve often found it intriguing that Portland would become one of the most active biking cities in this country: a city known for rainy weather. Wouldn’t biking make more sense in San Diego? Or LA? Or somewhere in Florida or South Carolina? Someplace with sunshine and warm weather year-round?

My incredulity is born from living in a sheltered, pampered, and climate-controlled culture. The lifestyle I am most familiar with, familiar to many Americans, is one that almost never requires a person to be outside at all, including children. Folks go from climate-controlled house, to car, to school/work, to indoor malls/stores, and back again, with only the annoying dash from parking lot or driveway back inside (or not even that, with virtual school, work-from-home, drive-throughs, curbside pickups, and home deliveries eliminating nearly all contact with outdoor weather conditions, as well as actual people–a phenomenon that seems all too common around me, as I have many neighbors that I have never seen leave their house, or even step foot outside, except to get into their car or bring in a grubhub delivery.)

It’s natural to just follow the norms, the patterns of behavior and attitudes that develop around us, often unconsciously. I have relatives that look out the window on a rainy day, frowning brow pointed outside, and say, “What a crummy, miserable day!” Or “I’m sorry the weather is so awful,” as if the offending rain were a fault requiring apology, and something to obviously be avoided. It’s certainly not an occasion to go family biking.

Which is why I picked up a copy of Swedish Mama Linda Akeson McGurk’s encouraging book: There’s No Such Thing as Bad Weather: A Scandinavian Mom’s Secrets for Raising Healthy, Resilient, and Confident Kids. I was looking for a counter to the anti-rain attitude that I am used to, as we enter Portland’s chilly and rainy biking season–my family’s first on a bicycle–and I figured some inspiration from a Scandinavian Mama could be just the thing to help us ditch our American-comfort-indoor habits and get us out the door and on the bike. 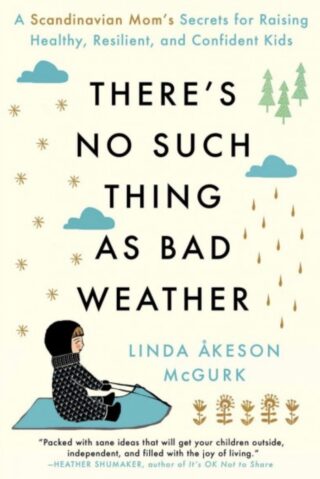 The book certainly delivers what I was looking for, and so much more. I am humbled by McGurk and her fellow Swedes. These are hardy folk. They live in a legitimately frigid climate, and have the cultural norm and expectation of spending time outside, every day, whatever the Nordic weather, including their children. Hence their saying, “There’s no such thing as bad weather, only bad clothes!” They simply bundle up and go: walking, hiking, sledding, skiing, and, once the roads are plowed, biking. Even the infants go, bundled into strollers. Perhaps the most telling quotation from the book was from a Swedish mum who (in normal Swede fashion) began daily walks outside with her newborn once the temperature had warmed up to 17 degrees Fahrenheit, and afterwards, like most Swedish parents, she left the baby in the pram to finish her nap outside, in seventeen degree temperatures. This Mama goes on to explain, “If it was below [fourteen degrees Fahrenheit] I didn’t put [the baby] outside by themselves, but I would still take them for walks. And if it rained, I just put a rain cover on the pram and went outside anyway. You can’t let that stop you.”

Cue my own shock-and-awe. Outdoor walks and rides every day, in temperatures well below freezing? Gee, I feel sheepish. Maybe I can reconsider my own hesitation to go outside in temperatures below forty! Certainly McGurk is just the person to inspire me to do so. With the same hardy spirit, McGurk reports that cities all over Sweden have steadily shut down more and more streets to car traffic, replaced parking spaces with bike racks, increased pedestrian and outdoor leisure spaces, and added other incentives, like limited and expensive parking, to encourage folks to walk, bike, or use public transit–and remember, this in cities that are covered in snow and freezing temperatures for a large portion of the year. Folks don’t seem to be complaining. According to McGurk’s depiction, Swedes are happy to be outside and use active transit, kids in tow. They expect and embrace such an active outdoor life. They would question (and probably protest) if it were any other way.

I find it exciting to discover such insights from other countries and cultures. They open my eyes to some of my inhibiting American/cultural/personal biases and habits, things I have perhaps never thought about, or never questioned, and which can be changed. Indeed, it’s amazing what is possible, what was always possible–but may have been unimaginable–with just a change in attitude or with the right tools, or a little inspiration from somewhere else.

Linda Akeson McGurk provides just that sort of non-judgmental inspiration. She gives us a glimpse of an outdoor life, yes in wet and cold, that is completely normal in another part of the world. She teaches us not just a motto, but a useful family philosophy when she says, “There’s no such thing as bad weather, only bad clothes.” There’s no reason why we can’t look outside on the next rainy day and say, “How lovely! Let’s go for a ride!” It will take some effort, and a bit of practice, but if mamas and babies can do it in Sweden, well darn, we ought to be able to do it out here….just as soon as my new poncho arrives!

— Shannon Johnson, shannon4bikeportland@gmail.com and @shan4bikeport on Twitter.
— Get our headlines delivered to your inbox.
— Support this independent community media outlet with a one-time contribution or monthly subscription.

Shannon is a 36-year-old mom of  five who lives in downtown Hillsboro. Her column appears weekly. Contact her via shannon4bikeportland@gmail.com

Right. There’s no such thing as bad weather unless you have to earn a daily living, and can afford the latest in cargo bikes and all-weather (even heated!) clothing. Plus, these days, that upscale coffee shop/bakery is never that far away.

There’s no such thing as bad weather unless you have to earn a daily living, and can afford the latest in

Did you forget the contraction?

There is no such thing as bad weather, full stop. It doesn’t take much to prep for winter, or summer for that matter. Up to and including studded ice / snow tires.

I love the family including in this article too.

Great perspective! Even though I go through this every year, I am still surprised at how infrequently I am rained on, or the rain is really light. And, how it seems colder outside when I am getting ready to ride than when I walk out the door. So far this year, I have only been rained on once despite having a lot of days where it rained while I was at work. I love my bike poncho for this reason. It is easy to throw on if I need it, but otherwise I can keep it in my back backpack. Wether I need it or not, I can wear what ever clothes I need for that day at work or whatever.

I appreciate this mantra but I find it works better for mamas and babies than for parents and preschoolers with their own large opinions. I’d like to think I’m raising my 5yo to be a hearty northwesterner but she very vocally does not like being outside in cold and rain, despite my attempts to provide an array of weather-appropriate gear. E.g., she hates wearing rain boots and picks her sneakers that then get wet. Any ideas on sharing an all-weather attitude with young kids, aside from modeling and buying ever more gear options for them?

Interestingly, the Swedish mama who wrote the book I reference had the same problem when she was raising her daughters in the U.S.: They complained and threw tantrums about going outside in the cold/snow, which was rather unfamiliar for a Swedish mama to figure out. That totally changed when the family spent an extended stay in Sweden, where all of the kids, all of their schoolmates, neighbors, and new friends, went outside everyday, and in much colder conditions than her U.S.-raised girls had been used to in Indiana. The author was surprised that her previous anti-outdoor-in-the-cold daughters jumped right in with their new peers and began playing outside without complaint.
Pondering that, I am wondering if finding a like-minded family with children of similar age who like to play in the rain might be helpful? In other words, rather than more rain gear, maybe your daughter needs some rain friends? Kids often do what other kids are doing, and if they see other kids enjoying the rain, they may be more likely to enjoy it too. Lacking that, perhaps you can make an effort to not merely survive the rain, but truly enjoy it together: jump in mud puddles, slip and slide on the wet grass, go fast down wet slides, dance in the rain, make mud pies, and so forth. Your kiddo may just have a personality that dislikes mud and prefers being neat and dry, or she may have internalized cultural attitudes that are anti-rain (like teachers who say it’s time for indoor recess); if it’s the latter, you can help by showing a different idea.
All of my children have slightly different responses to the wet weather, but they always enjoy it more when we encourage them to do so (rather than trying to keep them dry/clean, or chastising them for muddiness), and when they have each other to play with. The focus becomes on their play, rather than the weather.
Oh, and my daughter wants everything to be pink and unicorns. So her gear preferences are almost entirely based on her sense of style. That means if she doesn’t like the look of the rain gear, she’s going to want her pink sneakers. I keep this in mind when buying her rain gear–pink boots! She wants it to look “cute” according to her own definition. Maybe letting your little one help pick out her rain gear will help her to like it?
Let me know if you find a solution that helps your family. I’d love to hear back.

I love these ideas! We probably could use more rain friends and I am also trying to quietly emphasize some of the upsides of being out in the rain/cold. Just today we biked to school and it started raining in the interval between leaving the house and getting on our bike. My daughter grumbled a bit about how we should really take the car, but once we got underway she was excited to say that she *finally* got to catch a raindrop on her tongue.
I’m always on the lookout for ‘cute’ rain gear, and luckily we are close to a fun consignment shop that has rotating options. Perhaps we will find the ‘unicorn’ boots she might like, with or without real unicorns. I think she really doesn’t like the feel of clunky shoes like your typical rubber boots, so maybe I will investigate something like hightop sneakers with a waterproof lining instead. It would be a step in the right direction at least!