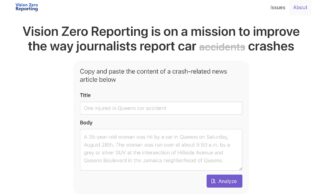 A software developer has created a tool he hopes will improve media coverage of traffic crashes.

As we’ve shared many times here on BikePortland over the years, words matter a lot when it comes to how our society responds to traffic deaths and injuries. At most media outlets, the bulk of reporting on traffic crashes isn’t reporting at all, it’s nothing more than a copy/pasting of police bureau press releases. This, combined with the general pro-driving bias that exists because the vast majority of news outlet staff are soaked in automobile industry cash and propaganda, identify most strongly with driving, and have no experience as an urban walker or bike rider, leads to stories full of victim blaming and a total lack of context and seriousness when it comes to the epidemic of traffic violence and its impacts on our lives.

That’s why my eyebrows popped way up when I learned about the Vision Zero Reporting project posted to Hacker News on Tuesday. Its creator is New York State resident Gregory Lang. I chatted with Lang on the phone this morning.

By day, Lang works as a software programmer for a U.S. Department of Defense contractor. He isn’t a street safety activist, but he took a few urban planning courses in college. Several years ago while reading media stories about crashes, something bothered him. “There was this story in my local newspaper about a man and it said he was walking in the roadway and he was struck by a vehicle,” Lang shared with me this morning. “And then I did some digging and looked at the road on Google Maps and saw where he was hit there are no sidewalks on that road and it was winter time and the snow is probably piled up on the side… So it came off as victim blaming because he’s walking in the roadway but there are no sidewalks.”

“These articles had this sort of bias, even if it’s not intentional.”

That revelation led Lang to search for research on the topic. When he found the groundbreaking Editorial Patterns in Bicyclist and Pedestrian Crash Reporting by Kelcie Ralph, Evan Iacobucci, Calvin G. Thigpen, and (former Portlander!) Tara Goddard, he knew he was onto something.

Lang set to work using his skills in “natural language processing” (which Lang says is about, “applying machine learning to written language so we can get computers to understand text”) to create his Vision Zero Reporting tool which aims to, “detect editorial anti-patterns in local news coverage of car crashes.”

Here’s how it works:

A user simply pastes the headline and text of a story into the text windows and the tool spits out a grade along with a detailed report that explains problems found in the article. The tool grades on six problems, which Lang defines below:

1. Focus – Readers find the focus/subject of the sentence more in control of the situation, and hence more blameworthy (e.g. “A pedestrian was struck by a driver” VS “A driver struck a pedestrian”).

4. Accident – Accident is the most-used term in articles to describe the incident (47%). This term is being phased out by some news agencies because the word implies a sense of inevitability or that it happened purely by chance, when we know why car crashes happen and can take preventative action.

6. Counterfactual – (still in beta) Counterfactuals are true statements, but imply the outcome could have been changed had the victim acted differently. While reporters may see these statements as sticking-to-the-facts, we’ve discovered in 700+ manually-annotated articles that counterfactuals almost always shift blame toward the victim (A bicyclist was struck; he wasn’t wearing a helmet. It was dark outside, the biker wasn’t wearing reflective clothing, and the driver told police he didn’t see the bicyclist until it was too late.) Notice that all of these statements may be true, but goes hand-in-hand with the Framing issue discussed above: the bicyclist was hit, but is that because there is no protected bike lane? It was dark outside, but is road visibility a municipal obligation?

Lang said he’s already had a very positive conversation with the four authors of the paper his tool was inspired by and hopes his tool is used by journalists to learn how to write more accurate articles.

The tool is ready to be used today, but it’s still a work in progress. Lang says he’s still trying to improve how the software rates the framing of stories. He wants to encourage journalists to include thematic elements in their stories that give readers a sense of the overall trends in crashes (such as the number of deaths or collisions over a specific timeframe), rather than as episodic one-offs.

I pasted in a few headlines and stories from recent BikePortland coverage and my stories received a grade of D-! It turns out even I can do a better job about giving agency to drivers. I plan to use this tool in the future.

Lang would love feedback, so check out VisionZeroReporting.com to learn more and leave a comment below.

Wow! This is really fascinating. I would love to see Lang develop a tool like this for media reporting of sexual assault and gender-based violence.

Hi Betsy.. Yes! I asked him if he’d thought of using a similar tool for other issues like that and gun violence/policing, and so on. He said it would take some work but it’s certainly possible.

The third rail of a nation’s politics is a metaphor for any issue so controversial that it is “charged” and “untouchable” to the extent that any politician or public official who dares to broach the subject will invariably suffer politically.

I pasted the first crash review from the Oregon Walks report
https://oregonwalks.org/fatal-pedestrian-crash-report/

The tool deducted 2 points, but… the deduction was based on language referenced from the police report: “Responding officer notes indicate the person struck was experiencing homelessness, and state that he entered the road outside of a legal crosswalk.” Re-running it without that reference it passes muster. (And, as the OW report indicates the only pedestrian crossings were 1.1 miles to the south and 0.9 miles to the north.)

I’ll want to try more examples, but writing about crashes without passive voice and episodic framing is such a difficult change from what we “learned” in the 20th century this tool may be a help!

Vote Up5Vote Down  Reply
« Did you know you can adopt that concrete planter on your street?
SW infra update: Capitol Hwy stormwater basin, Bertha Blvd updates, and progress on Red Electric bridge! »