The Hawthorne Bridge bike counter is down, but not out 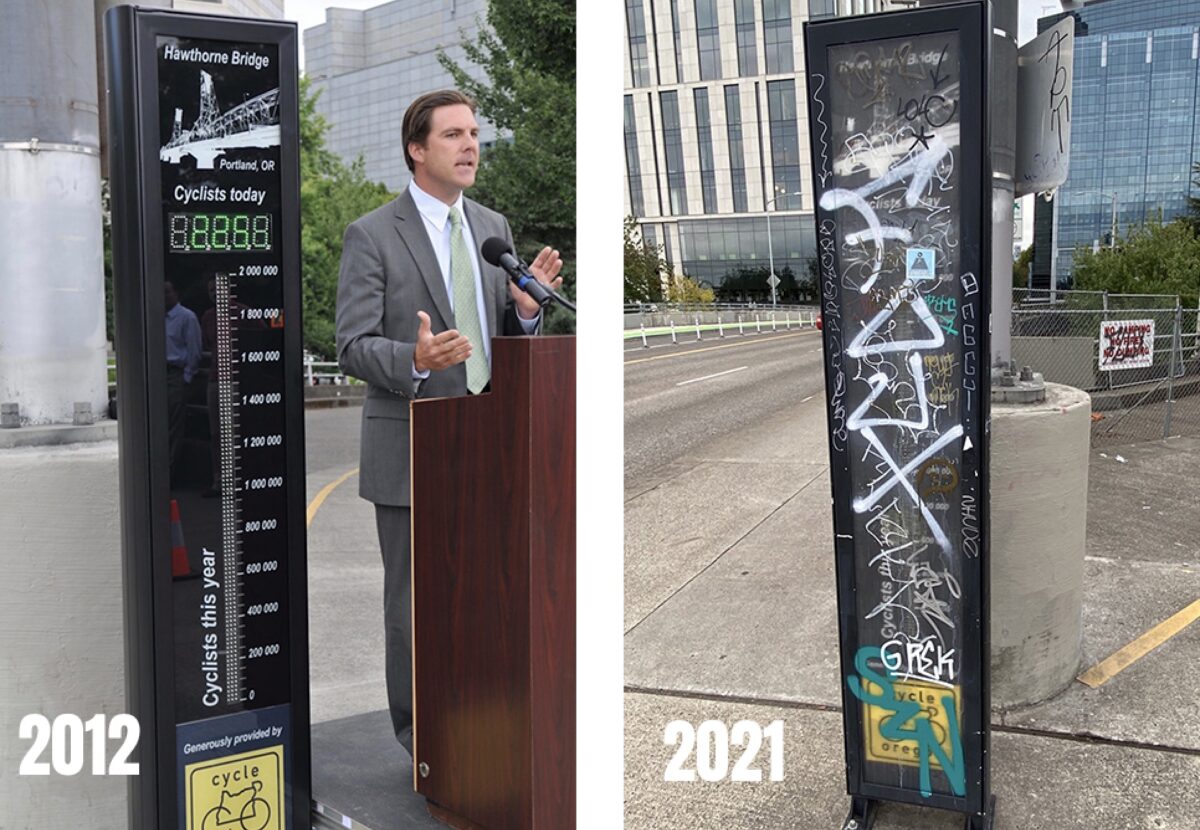 We were so excited for a bicycle counter on the Hawthorne Bridge that we published three stories before it was even installed with great fanfare in 2012. Less than a year later, the then Commissioner of Transportation Steve Novick hob-nobbed next to the counter at a Breakfast on the Bridges event where he hoped to earn the blessing of bike riders. Novick then marked the first million trips logged by the counter with a public celebration.

It was clear from the start that this counter was about more than hardware and data. It was a sculpture that honored cycling.

These days cycling is no longer the center of Portland’s political universe and the counter is no longer something any local dignitary would want to stand by. Covered in graffiti, its little green lights that once proudly counted riders by the millions are now dark. (Yes, I’m trying hard to not see the perilous condition of the counter as some sort of symbol that stands for something beyond just another vandalized object in Portland.)

There are many people in Portland who understandably do not care one iota about this counter. Even before our city was bombarded with more important issues like a shelter shortage, policing problems, an uptick in crime or a pandemic — many were quick to criticize this counter. Despite what you might have read by misinformed haters in The Oregonian, the $20,000 piece of hardware didn’t cost the City of Portland one cent. It was a gift from the nonprofit Cycle Oregon, a group that puts on large group ride events and used to be much more involved in cycling advocacy.

Counting the number of bike trips might seem superfluous, but it’s not. There’s a saying that “What you don’t measure doesn’t count” that applies here. Transportation departments have always had detailed car trip data and that has led to street designs and policies where driving is default and other modes are the “alternative”. There’s been a huge hole in commensurate bike trip data for years. Portland does a better job than most other cities, but as cycling has lost a bit of lustre in local politics in recent years, so too has our effort to count them.

We used to get annual bicycle counts and a summary report released to the media by the transportation bureau. But that count seems to have been mothballed. The latest counts on PBOT’s website is from 2018, and the bicycle count page doesn’t appear to have been moved to the city’s new website. The only mention I found was on a general “traffic counts” page where bicycles were relegated to a mere two sentences.

But all is not lost! Our Eco-Display Classic might be dark, but the hardware that actually counts bike trips appears to still be working and sending data back to a central server. The real-time data is displayed online and while current counts are a trickle of what they used to be, there’s life yet in this counter.

After posting a photo of the counter on Twitter this week, several local activists felt like it was worth saving. I’ve got requests for comment in to Cycle Oregon, Portland Bureau of Transportation, and Eco Counter (the Montreal-based company that makes it) to see if there’s any possibility to restore its former glory.

To your point what gets counted, counts.
https://www.oregon.gov/ODOT/Programs/ResearchDocuments/Bicycle%20Count%20Data%20What%20is%20it%20Good%20For%20-%20Research%20Note.pdf

We used to get annual bicycle counts and a summary report released to the media by the transportation bureau. But that count seems to have been mothballed. The latest counts on PBOT’s website is from 2018

I don’t think this is benign neglect but rather reflects PBOT and the city’s view of the transportation hierarchy.

We visited family in Portland just this summer and were saddened by how dirty and run down the city is. Trash and graffiti were everywhere. Do your leaders even care?

Not so you would notice

Portland 2020 – ? is going to be a case study for the broken windows theory. Seems to be supporting it, as far as I can tell.

Yes and no. Murders, felonious assaults and motor vehicle crimes are way way up. But other types of crime are flat or even down. I don’t think Portland is following the typical pattern that would have been predicted by those who espoused the broken windows theory decades ago.

Are other crimes down because they are actually down, or down because the police are not responding to “low priority” calls, 911 has 30 minute wait times, and people are giving up on reporting minor crimes to the police?

Yes. Government statistics in this area are meaningless. Cops either do not respond, do not file reports, or the public doesn’t even bother to report. My personal incident: I was run off the road this Spring by a car. Lying on the sidewalk, got lots of attention from cops, emts and the public. The driver was guilty of at least four violations (no insurance, no drivers license, failure to yield, and trying to cut through 7/11 to avoid stop light). Result: Zero No citations. The cop would not even give me her info, because he decided not to cite her because ‘our current policy is to warn violators at our discretion. Since you were not injured, and your bike had only minor damage, I will not cite her’. True story from Bend.

Just returned from a family visit in Orlando. While not the most bike or pedestrians friendly city I was struck how clean it was with no visible homeless camps or roadside garbage piles. My ride back home from PDX on MAX was nothing less then appalling and embarrassing as Portland resident with piles of garbage all along the MAX corridor. So to answer your question our leaders apparently don’t care or are completely unable to address basic public sanitary standards residents deserve.

Yes…a sad milestone for our former ‘Bike Town’ or now ‘the City that Cycled.’..as I used tell my traffic engineers…you only collect and publicly share the data you really care about…and also everything in the public realm needs maintenance but you only maintain (and not complain) about the modes (or things) you really care about at the end of the day…as they always have dedicated lines in the budget.

I’m on it. Jonathan Nicholas

I wonder if PBOT/the city would make that data available through an API. It would be pretty easy to build an independent website that updated in real time with that data (speaking as a web developer). It could even help bring the cost down of a new physical counter, if the current one is beyond repair.

TriMet made their real-time data public several years ago as a way to encourage the development of apps, and I think it’s been really successful.

And incidentally I can’t imagine the hardware could be that expensive; could probably be done with a Raspberry Pi and some low-cost sensors. It’s really only the actual display that would cost money, and I imagine it’d be less than it was in 2012. I bet these could be DIY’ed in lots of places.