Fresh off the opening of the Flanders Crossing… err, I mean the Ned Flanders Crossing in June, the City of Portland Bureau of Transportation has begun construction on another project just a few blocks to the south that will also vastly improve crossing I-405 for people on foot and on bikes.

Initially covered here in April 2016 after it won a $2 million grant from the State of Oregon and initially scheduled to be build in 2018, PBOT’s Downtown I-405 Pedestrian Safety and Operational Improvements Project finally broke ground on Monday (9/20).

The $3.1 million project was first identified in 2012 via the Pearl District Access and Circulation Plan. Among the highlights are the closures of slip lanes, two blocks of a two-way protected bike lane, and a section of NW Couch that will be off-limits to car users.

Below is a map and full list of what’s coming: 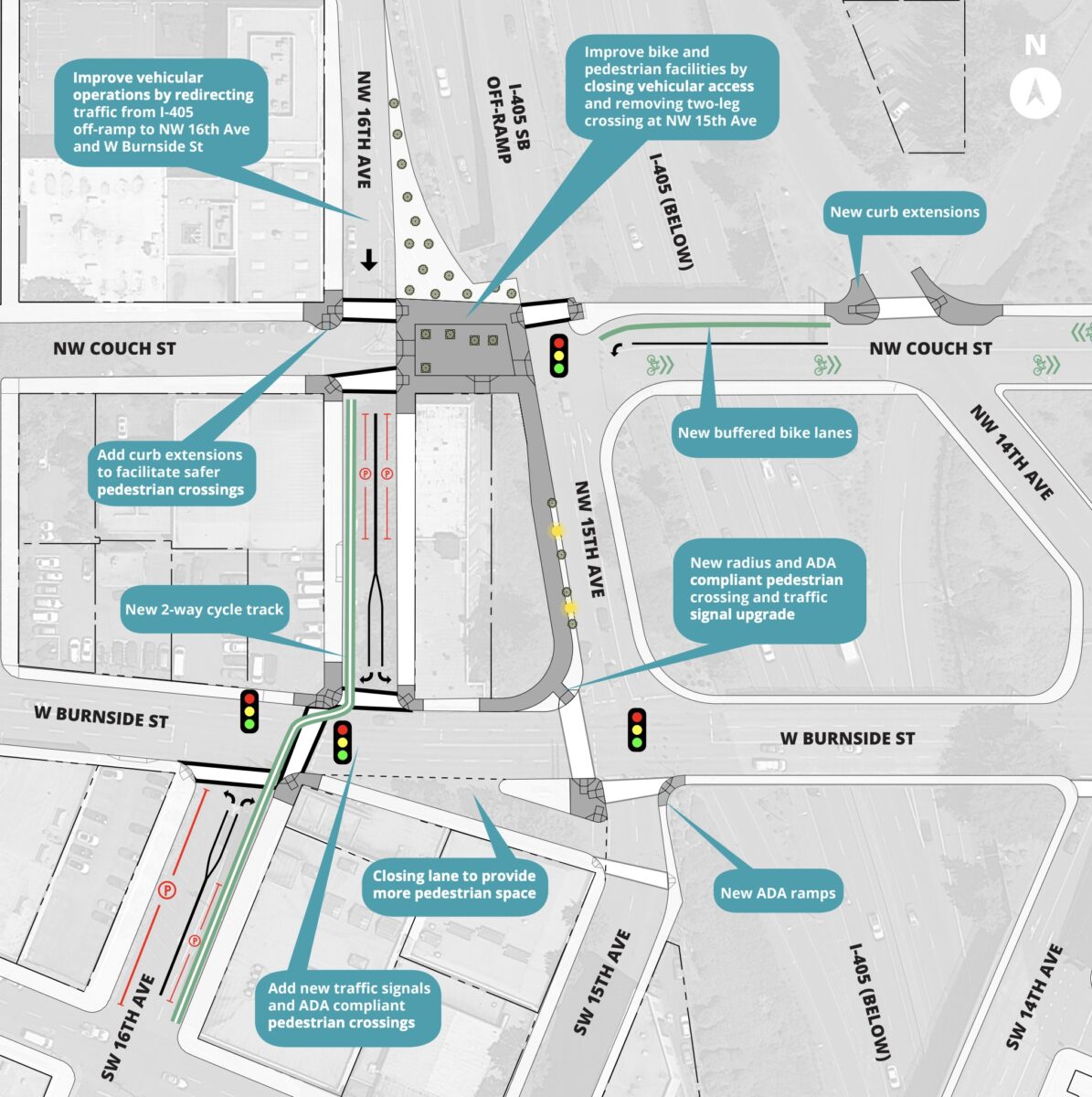 PBOT says if all goes according to plan, this project should be completed by next summer (2022). Learn more at the project website.

I wish they had planned something more for where 14th crosses Couch. Most drivers seem to me to treat 14th as part of the onramp to the 405N and start gunning it on 14th before they even get to Couch. Perhaps the curb extensions will induce some slowing, but a Stop sign or (gasp) signal would have been welcome.

Believe me, community members tried to get a signal at the northbound on-ramp and were told to blame ODOT.

I wonder what will happen with that new green space. I don’t have a lot of hope for the sliver between NW 16th and the 405 ramps, but I hope that the ground floor at 1512 SW Washington St can be opened up to use the old slip lane into something for pedestrians. I don’t see any announcements for plans to redevelop that block on NextPortland.com, but with the 3 adjacent blocks all being built into 7 &8 story towers I imagine someone will want to especially now with extra plaza space directly in front!

I live in the building in the middle of it all. I expect the newly created Pedestrian Triangle will be covered with 30 tents within 48 hours of it’s completion. Not judging those who will camp there, just commenting on it.

Grumbly complaint about PBOT’s graphic is just because an intersection is an offset T doesn’t mean it is two signals.

How much of the project cost is traffic signals?

I am the superintendent of condo building smack dab in the middle of this project.

JUST TO CLARIFY:
The City of Portland has ZERO plans to paint any pedestrian or bike crossing stripes where NW Couch crosses the I-405 on-ramp at NW 14th. THIS IS INEXCUSABLE. Parents with school children have to RUN across that intersection to avoid cars speeding up to get on the freeway.