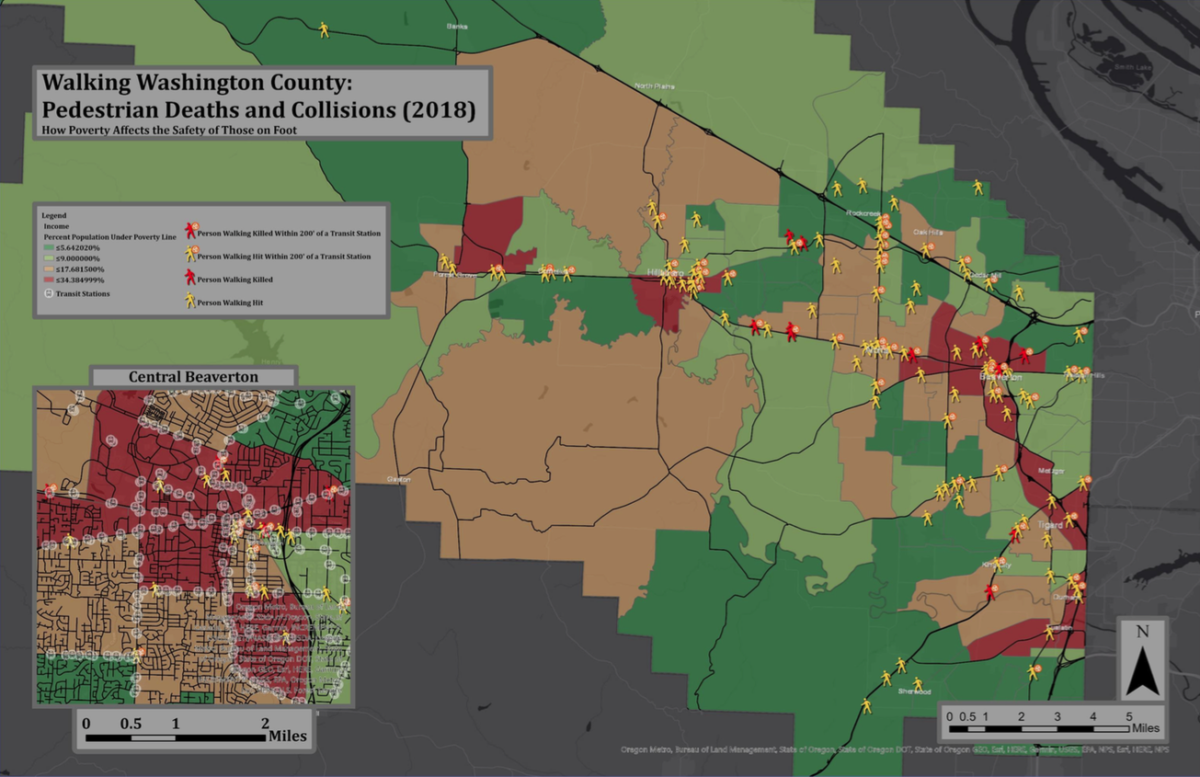 Anaysis of pedestrian crashes in Washington County with poverty level as base. Source: Benjamin Fryback

Oregon State University student and community activist Benjamin Fryback (@bfryback) has added his voice to the chorus of safety advocates who would like more complete data about pedestrian crashes. Fryback analyzed pedestrian crashes in Washington County for his “Geospatial Information and GIS” class. Using publicly available datasets on income, race, ethnicity and transit stops, his visual analysis and simple calculations suggest a correlation between poverty rate and crash severity, with pedestrian crashes in high poverty areas disproportionately resulting in fatality.

Pedestrian crashes in high poverty areas and those which result in fatalities. Click to enlarge. Source: Benjamin Fryback

He also notes that in the urban areas of downtown Beaverton and Hillsboro more pedestrians are hit, but that relatively fewer of these crashes are fatalities. However, “It is difficult,” he writes, “to determine what this can be attributed to, as Washington County fails to maintain even the simplest of GIS databases on the roadways within their jurisdiction.” He adds that entries in the CrashData datasets are often incomplete and can be missing key information such as speed limit, lane count and conditions. Moreover, it is estimated that non-fatal crashes are only reported between 44 to 75% of the time, this underreporting confounds crash analyses. Readers might remember that Oregon Walks made several recommendations about crash reporting in their Fatal Pedestrian Crash Report which came out earlier this year.

To get around some of this missing information, Fryback employed the lower-tech solution of looking at crash sites. For example, he determined that the four people killed walking on Tualatin Valley Highway were all within a block of a transit stop, and that three of them lacked nearby traffic lights. 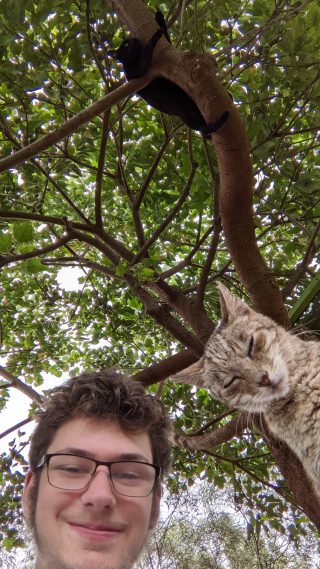 These deaths in particular caught my attention because a couple years ago I could have easily been one of those tiny TV Hwy red people in Fryback’s graphic. I had taken the MAX to pick up my car from the body shop. Instead of following everybody else (who it turns out were taking a skewed path to the only nearby traffic light) I headed straight for TV Hwy only to arrive at the edge of the road with no place to cross, the nearest light seemed about a quarter mile away. At the time, I was recovering from a broken leg and arm. I was also 58 years old, and overweight.

Do you know I considered making a dash for it? with everything I know about pedestrian traffic deaths, and using a cane? My auto body shop was just across the street. Then a little voice whispered, “Lisa, you are about to become a statistic.” I listened to it, and instead phoned the car people, who drove over and picked me up. It’s not that hard to misjudge these streets, especially as you get older–or perhaps it’s your own abilities you misjudge.

Fryback, who grew up in Hillsboro, is a Civil Engineering major and would eventually like to work for a municipality on equitable transportation infrastructure. This summer he is getting valuable work experience as a summer intern for the Shoalwater Bay Tribe.

Thank you to Benjamin for doing this important work!

Nice work Ben. Can’t wait to see what’s ahead of you!

Good job, Ben! Glad I got to hear from you first-handedly about this report before it was ‘published’. Always good at writing reports and kicking a**, now get a job at WashCo and show them all whats up!

It’s refreshing to see a Civil Engineering major studying roadways from a pedestrian perspective. So much roadway design is car-centric. Another factor in pedestrian crashes that would be worth investigating is the presence or lack of pedestrian facilities and/or posted speeds at crash locations. Many roads in Washington County have discontinuous sidewalks or none at all!

How has this not been done before?

EJ analysis should be happening everywhere all the time. It’s a lot harder to crunch this data then it looks. There’s open source software and lot of data sources. Suggest you a spot and dig into the data.

What I find troubling, and this fairly universal throughout the country, is the disconnect between public transit agencies and making walking routes safe enough for transit users to get and from public transit. At some point, either on the going or on the coming back, a transit user has to cross at least one street, often a rather dangerous one. TriMet has at least acknowledged this reality; most other transit agencies, particularly municipal agencies, have not.

I agree wholeheartedly. Thats why I delineated people being hit or killed within a block of a bus stop, showing potential bus riders being put at risk by the lack of facilities/presence of dangerous infrastructure. I have a hunch that this dangerous infrastructure, combined with increased transit use, is to blame for increased amounts of drivers running people over, but it can’t be proven without reliable roadway data, which is so aggravatingly unavailable.

Back when I was at the EPA working on ISTEA analysis, those types of investments fell under the “Enhancements” funding umbrella.

Lisa – let me guess, your “can I make it?” situation happened at TV Highway and 141st near the Millikan max stop? I almost got hit there several times until I figured to backtrack over to the light at Hocken. My commute got so (so) much better when I made that change!

TV Highway is a scary mess whether on a bike, walking or driving.

You got it, that’s the spot. The closest light for me to walk to would have been at Murray. I was about one week out from having spent 5 weeks in bed with a broken leg–healing the old-fashioned way, no pin or surgery. No way was I up to walking to Murray and then backtracking all the way to 141st, it would have been about 1/2 mile.

As I stood at the side of the road it became really clear to me how people were getting hit.

I hope the OSU GIS program gets expanded into their Civil engineering program. The OSU GIS lab is mostly driven by oceanic studies out of Newport. There’s HUGE potential here for that lab to “corral” the engineering department with some environmental justice analysis. The day of reckoning is nigh . The University RARE program is also undergoing a racial justice “adjustment” in Oregon rural areas. Take the PSU community transport class on. A rural Oregon roadshow.

Thanks Ben for some terrific research! I can’t wait to see where you go in your career. I hope this raises some eyebrows in Washington County and at TriMet.

Really love this Ben! I’ll be sharing this with community leaders in and around Beaverton.