Today the Intergovernmental Panel on Climate Change issued a dread-inducing, landmark report and said we face “a code red for humanity” because we have not done enough to limit the use of fossil fuels and the earth is heating up quickly as a result. Four days ago the Oregon Department of Environmental Quality released a set of draft rules that would give regulators a fighting chance to do something about it.

The DEQ’s new Climate Protection Program includes a suite of proposed rules that aim to limit greenhouse gas emissions from significant sources in Oregon. The rules would be the most ambitious and holistic approach ever taken by the State of Oregon to battle the climate crisis. The rules, which still face a 60-day public comment period and subsequent approval by the four member Environmental Quality Commission, would set caps on emissions and allow polluters to trade or take offsetting actions if/when they go beyond them.

As currently written, the rules would establish enforceable limits on GHG emissions that would be lowered every year until Oregon reached an 80% reduction by 2050. The rulemaking effort focuses on emissions from the manufacturing, distribution and sales of fossil fuels. (Emissions from electricity generation are not part of this new program). 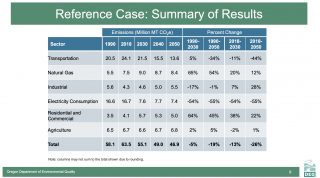 DEQ has worked on the rules for almost two years with a 35-member advisory committee that has met seven times since January 2021. The committee includes advocates from environmental and social justice organizations, energy and timber companies, tribes, public health experts, trucking interests, business lobbyists, and so on.

In addition to setting limits on GHG emitters, the program will allow regulated fuel suppliers to meet their reduction limits by supporting clean energy projects in low-income and communities of color.

DEQ hired a consulting company to analyze how four different GHG reduction scenarios would impact the economy, air quality, and public health. (See a PDF of the results here.) They found all scenarios would result in: substantial cumulative monetized health benefits of about $2 billion; minimal economic impacts with a net positive trend for gross state product, jobs and income; and positive benefits for communities of concern.

On June 25th over two dozen individuals and organizations from the Climate Protect Program Rulemaking Advisory Committee signed onto a letter (PDF) that outlines serious concerns about the draft rules. They want a guarantee of stronger emissions caps, fewer loopholes for polluters, and more oversight of stationary sources like electricity producers.

Yamhill County Commissioner Casey Kulla, who recently visited Portland to do a few Pedalpalooza rides, signed the letter. “In light of the IPCC report I hope that the Environmental Quality Commission will really look at the strength of that letter when considering whether to adopt these draft rules.” Kulla is a farmer when he’s not being an elected official, and says this year’s past and coming heat waves give him grave concerns. “As somebody who farms and works with people who are growing stuff, we are right on the edge,” he shared with BikePortland today. “I know farmers who consider the smoke (from fires) as an existential threat.”

As for his fellow rural residents who have opposed Oregon Governor Kate Brown’s attempts at environmental legislation, Kulla says, “I feel like this is the opportunity for farmers who may have supported the Timber Unity walkout to be like, ‘We get another chance.'”

Whether Oregon has a chance to move the needed on GHG emissions could depend largely on the strength of these rules. If you’re looking to take action in your own backyard, check out the DEQ Climate Protection Program website and be sure to share your comments before October 4th.

Thank you for reporting on this, even though it’s tangential to your subject matter. I don’t believe this rulemaking has been reported in any media here in Eugene at all, much less that there was a significant minority report against it.

Human overpopulation on a dying planet. Mother Nature is finally starting to deal with it. Some folks who study this stuff say a die-off of about 4 billion humans worldwide would bring the planet back into balance and better in line with what resources remain. Ouch! Stay tuned.

It’s not the population as much as it is how that population behaves.

It’s both. Almost nothing in the world is black and white; everything is a shade of gray. And the blame here lies both on people for selfishly having way too many kids, and on people for not changing their behavior as needed

I agree that most things are on a continuum, but that doesn’t seem to be the way our society is thinking/functioning these days. IMO, leaving aside political labels, it’s all about being selfish vs. being for the common good. But there are thresholds and tipping points for climate change among other things. And there are still people having 3+ children because they can either afford to or some religious leader led them there.

Funny how those most concerned about overpopulation won’t touch the third rail because it’s politically incorrect to do so. Maybe do some research on birth rates by religion and your eyes will be opened. (Spoiler alert: It’s not the Christians who so many detest that have the highest birth rate.)

Birth rate correlates with education levels and access to birth control, but also religiosity. It’s a complex cultural issue that has a lot of contributing factors.

Conservative leaders in the United States who restrict foreign birth control aid are hurting or helping the issue, in your mind?

There’s nothing actually useful about this point. Population isn’t the problem, pollution is, and changing economic systems dependent on energy and materials sources that have intrinsic pollution is the task at hand. Targeting population as the problem with climate change as an excuse is just a veneer for policies that are intrinsically fascist. A smaller population can emit just as much as a larger one, and nothing good comes from treating or thinking about our fellow humans as the problem.

It sounds like Oregon is simply doing what other states have done since the 80s: outsourcing their most polluting energy sources to other states or to Canada, rather than significantly reducing their energy needs.

“In addition to setting limits on GHG emitters, the program will allow regulated fuel suppliers to meet their reduction limits by supporting clean energy projects in low-income and communities of color.” Most ‘clean energy’ projects are themselves polluting, of shortened lifespans, and the cause of blighted landscapes – what have low-income and communities of color done to deserve such an awful fate?

Without federal legislation AND a bit more awareness and compromise in the general population, what do you propose? It’s perfectly clear now that the advocates and the deniers are on completely different trajectories.

Well, naturally the governor needs to form a commission to study this, made up of industry insiders, whites-only environmental groups, and rural property owners. The commission should outlast human beings as a species, of course. They can issue their first report sometime after 2030.

Agreed. But hey we’re going to cap I-5 so all’s good. When will Oregon get a world-class commuter rail link between Eugene and Portland? And when will ODOT stop working on autopilot

Unfortunately, I think this is going to be just as effective as Portland’s Vision Zero talking points – we’ll blah blah blah about it while nothing changes. It was a beautiful planet we had, a shame we’re going to lose it.

This is the epitome of greenwashing, making it seem as though you are doing something but with big holes that ensure the regulations will not be effective in reducing emissions. The Oregon Democrats are not going to do anything to hamper the profits of their benefactors, and this (among many other things) proves it.

Lowell
Reply to  The Dude

Holes so big, you can pave a twelve lane highway through them.

Hubba Hubba
Reply to  The Dude

It is not necessarily the profits of their benefactors that are causing them to push useless solutions. It is more likely the fact that they like getting in their cars and going places just like everyone else on the planet does – including about 99% of the “true believers” posting here.

HOLY COW! That right there sounds like a whoooooole bunch of hype over nothing which is exactly what it will accomplish. If the entire USA, were to stop ALL GHG emissions today, it would do nothing toward limiting global warming. The rest of the world spews on.